I love reading articles on finance, savings in the household budget and all things to do with money.  Many years ago Anita Bell wrote a book on how they paid off their mortgage in 3 years on $50,000 income.  The thing with every generation is, house prices get higher and you wonder how your kids will ever be able to purchase a home. 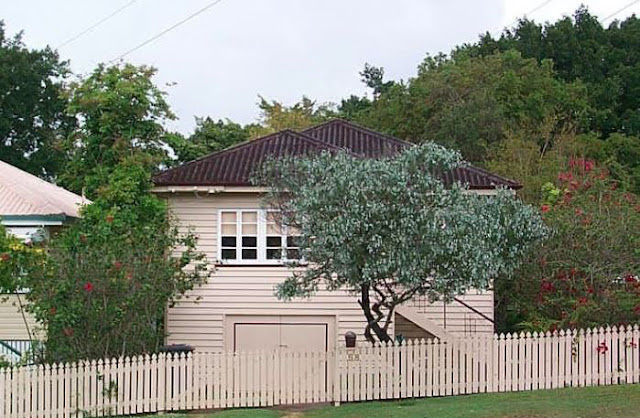 I then bought my second house about one km away for $117,000.  I also renovated this house by knocking out the back section of the house putting a big covered deck, new kitchen etc and landscaping.  I had a builder to do the building works however I did all the painting.  This house was the same style as my first house, a 2 bedroom post war house with a little sunroom entrance which the main bedroom opens onto.  I also put in the driveway and paths, garden beds and landscaping. I loved both of these houses and as I was single had plenty of time to renovate on the weekends.  I sold this house for $254,000 in late 2002 and basically doubled my money in 4 years.  18 years later It was on the market last year and sold for $680,000 in October, 2020.  It's still a post war house, 2 bedroom with a car port out the front so crazy prices. 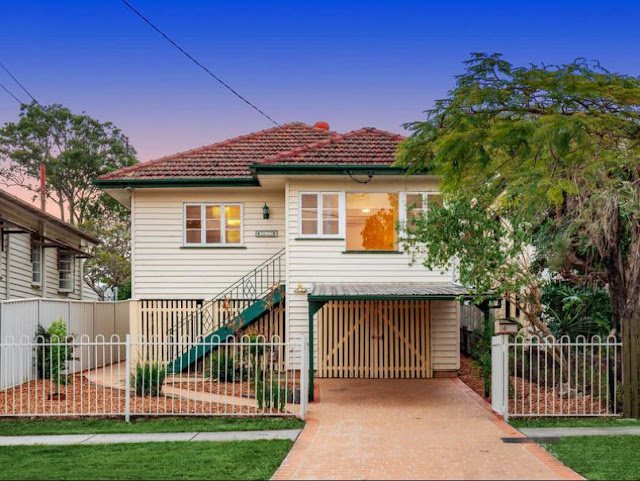 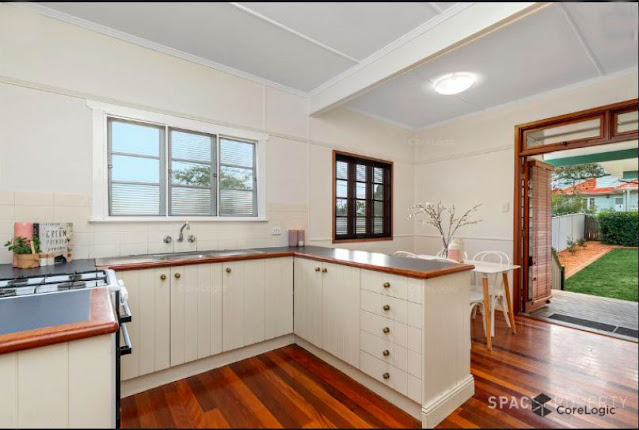 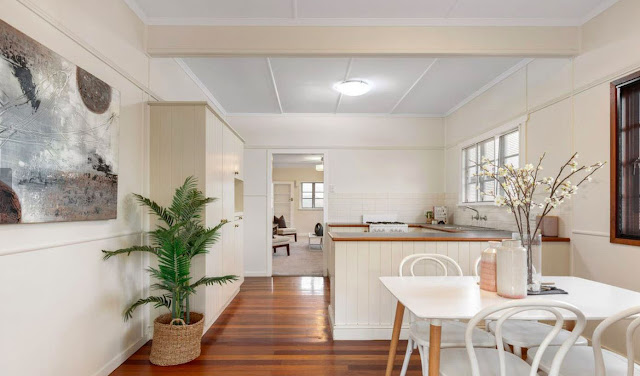 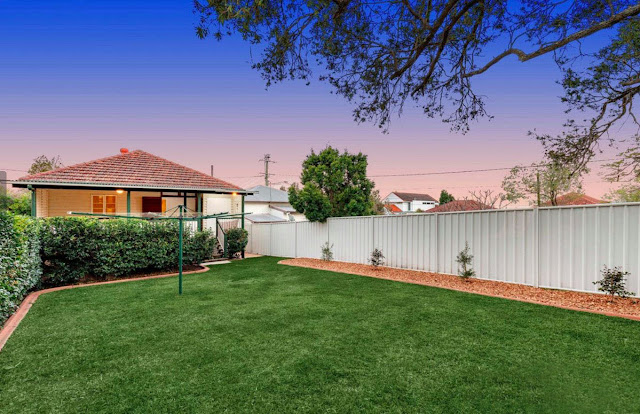 I'm so proud of myself for doing this on my own and also knowing that your first house is never your dream house.  I now live in a brick 4 bedroom, 2 bathroom, 2 family room home and I love it.  Even though I love post war homes and the traditional Queenslander homes were too expensive for me to buy, they require a lot of maintenance and external painting which costs a lot of money.  I love living in a low set brick home.

Back to money and finances.  Often when people get pay rises it means they can then splurge on things they want because now they are earning more money.  Then the next pay rise comes and the same thing happens and what you can find is lifestyle creep.  People earning less income can often make their money go further because they have to, whereas large income earners aren't so worried about spending the money because there is more of it.

Years ago Wendy from My Abundant Life blog was featured on "A Current Affair" back in 2014 and her story was amazing.  One income family, two kids and they paid off their $100,000 mortgage in a few years. This was a post that Wendy wrote one year after it had aired.

There was also some talk in the media about the family being poor and Wendy wrote this blog post about her thoughts on it.

Over the years I have cut my family's food budget to a lower amount however even I wonder how on earth Wendy does it.  Here's a few links that might be useful on Wendy's blog:-

Posts on cleaning and home made cleaning products thereby savings hundreds of dollars a year and Miracle Spray recipe.

Is the frugal life worth it.

Every family has a different perception of what is normal.  I grew up in a 3 bedroom house with 7 family members and we all shared bedrooms.  We had one small bathroom and a separate toilet.  In our bedrooms we had two single beds and a stand alone wardrobe and that was it.  These days most kids have their own bedrooms so family homes are larger and often there are two living rooms vs one lounge room when I was growing up.  There are media rooms, study/home offices and generally our homes are double the size of what they were back then.  These days homes are getting bigger and the land size is getting smaller whereas I think it should be the other way round...smaller homes and more outdoor space.

Saving money certainly begins in the home from food shopping, cleaning supplies, not wasting food, getting the best deals on mortgages, insurances, phone plans, electricity etc.  On the home front there is a lot that can be done towards the household budget.  You will certainly be inspired by any of Wendy's posts.  If you have any special tips or tricks you would like to share I would love to hear them.

Around Here - The Royal Funeral

Last week I watched Prince Phillip's Funeral on TV and it was beautiful.  It was very sad seeing the Queen wearing a black face mask sitting all by herself in the church.  That was a pretty heartbreaking scene and it certainly shows that life is different in a pandemic.
What an incredible life he lived and how he was admired by many.  I think one of the nice things about the pandemic [if you can say that about a pandemic] is that during his last year he and the Queen would have spent the most amount of time together at home than they had in years.  Even though he retired a few years ago, the Queen was at home on Zoom instead of her many engagements that would normally take her outside the Palace.
I think it's so comforting for them that they got to spend all that time together and that he got the funeral that he had personally planned, small and intimate with his family all due to the pandemic.  As for the 4 singers in the cathedral, wow, having their voices echo as if they were a whole choir was amazing.  It was very moving and just the way he wanted it.  It's such a significant moment in history and to make it to nearly 100 is a milestone in itself.
It was very moving that during his whole life he walked two steps behind the Queen and for his final farewell she followed him which gave me goosebumps.   He has been around her since she was 13 years old and it will be a big loss and adjustment for her and the Royals. 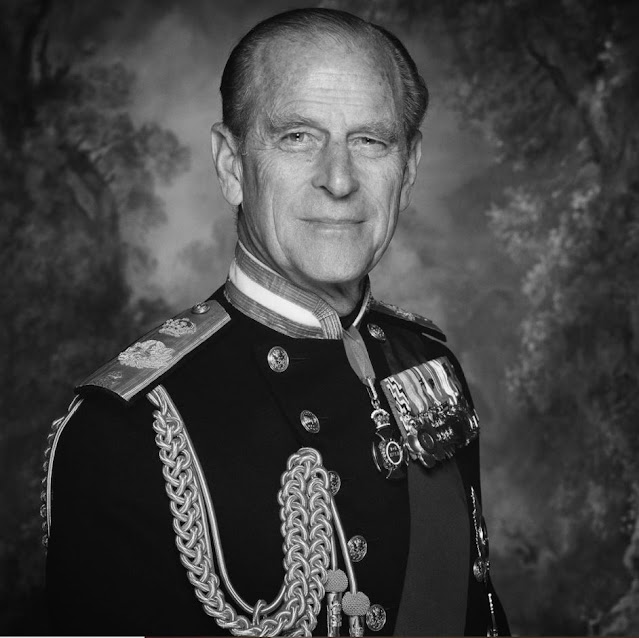 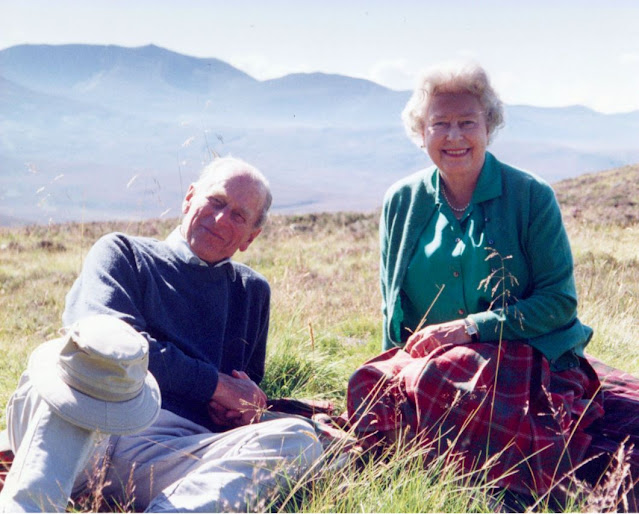 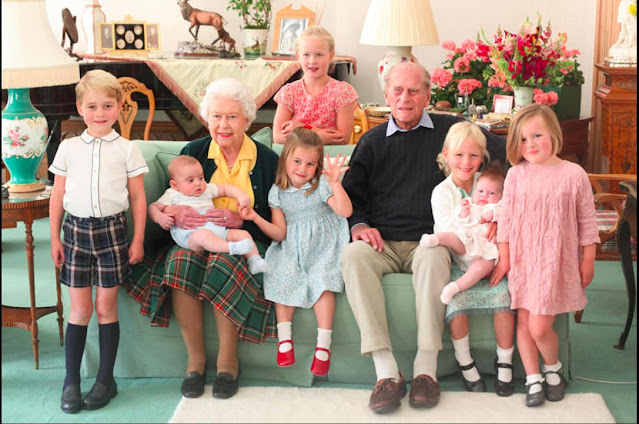 This was a great photo, Prince Phillip had secretly dressed up as one of the Guards
and then the Queen realized it was him and they were both smiling. 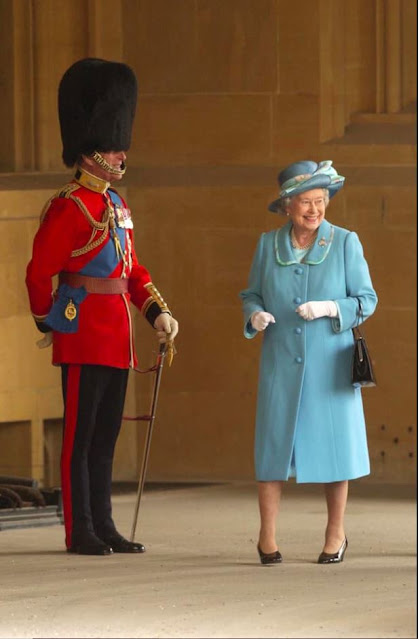 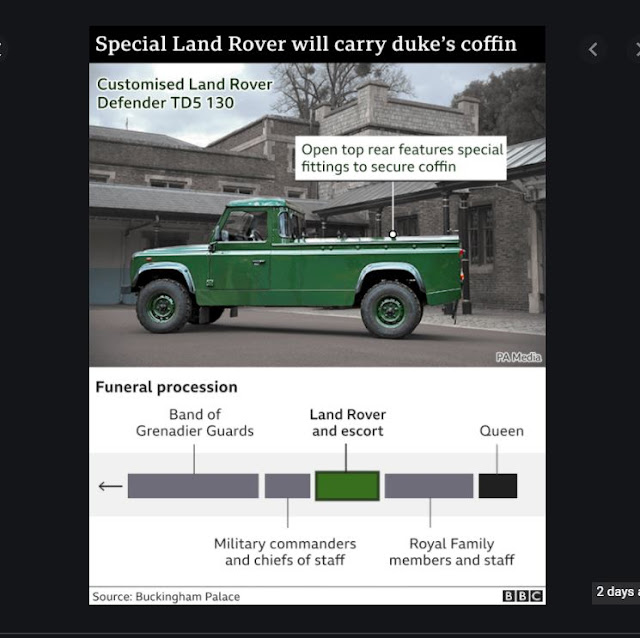 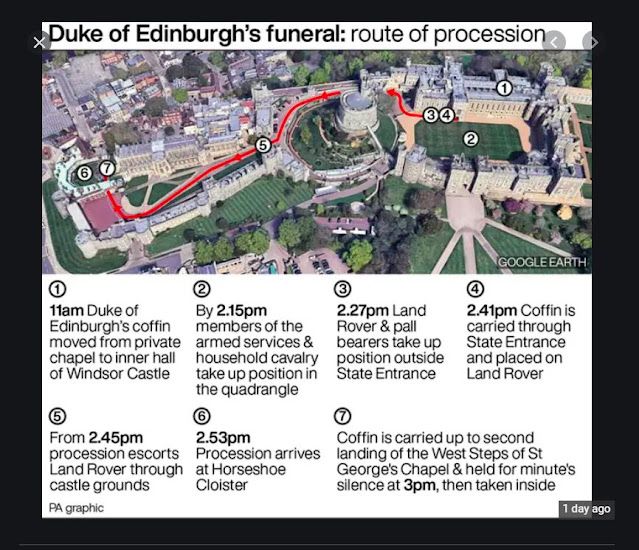 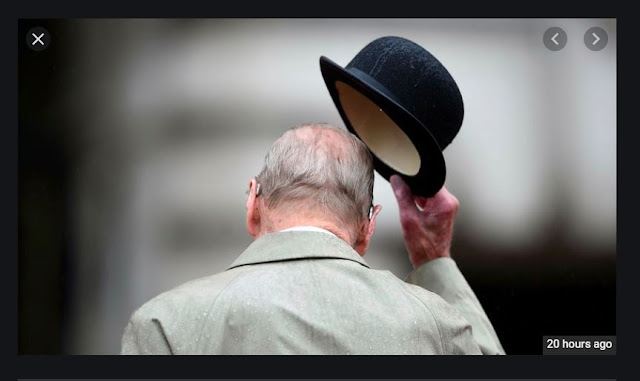 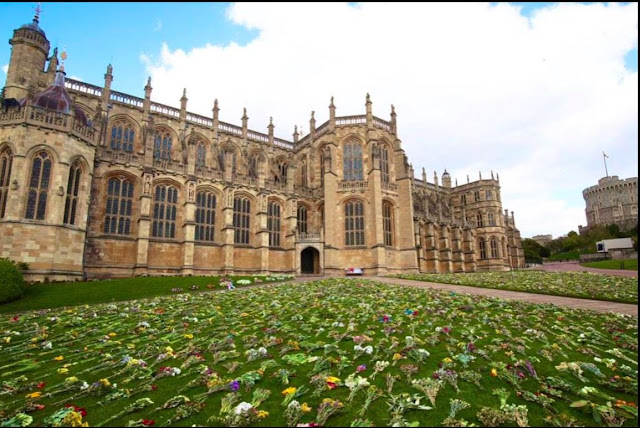 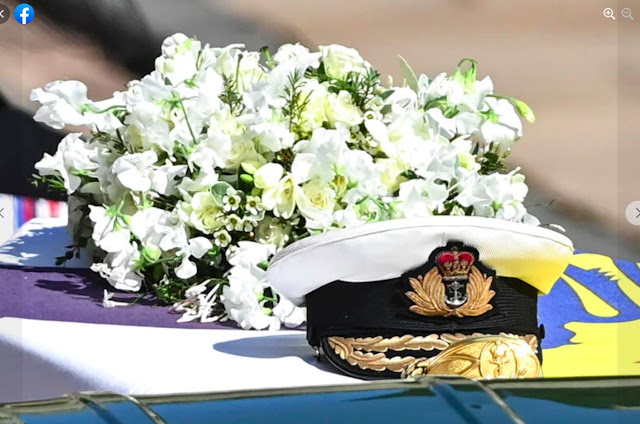 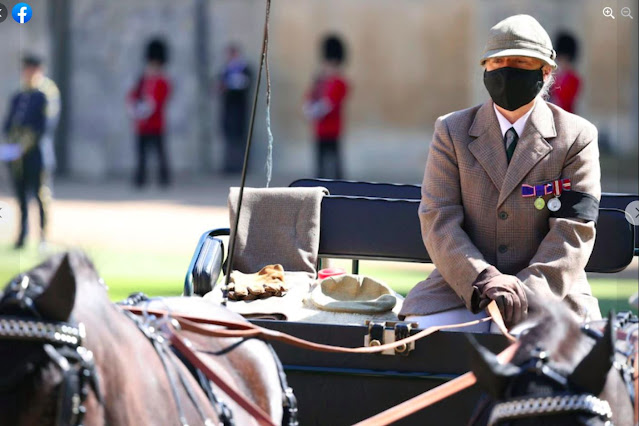 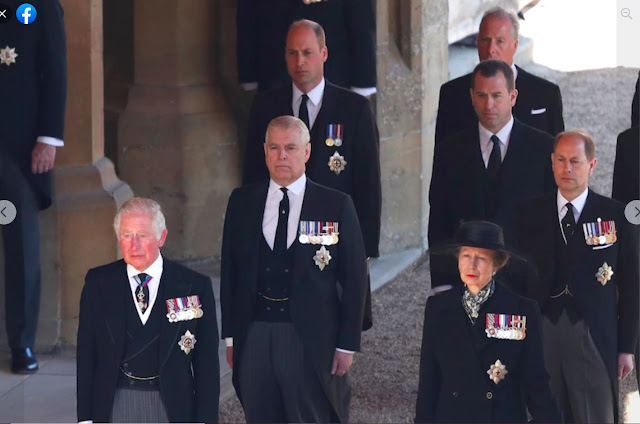 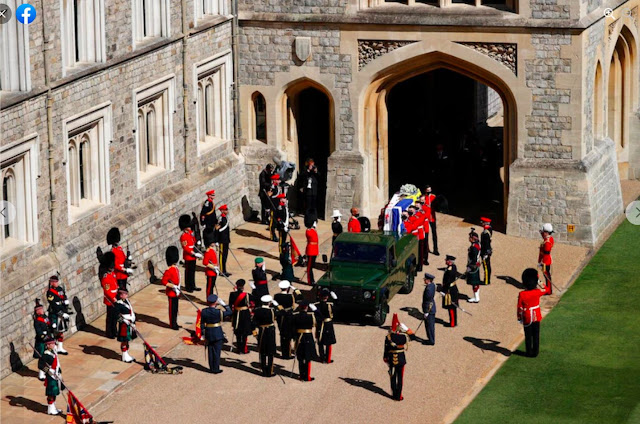 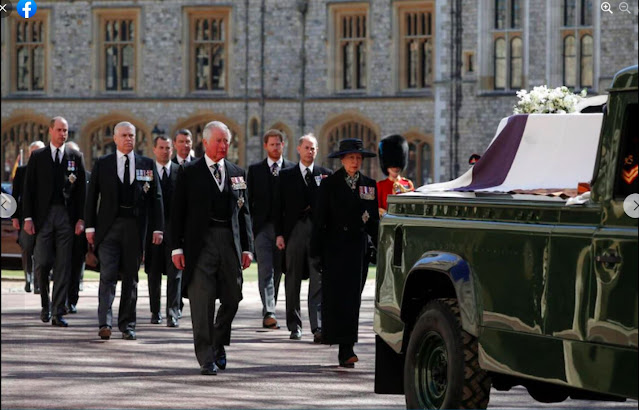 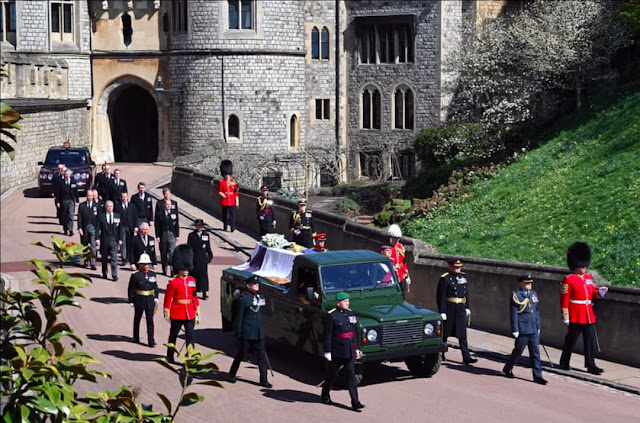 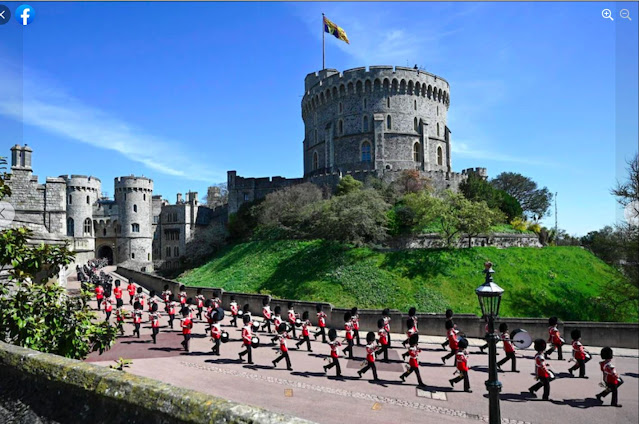 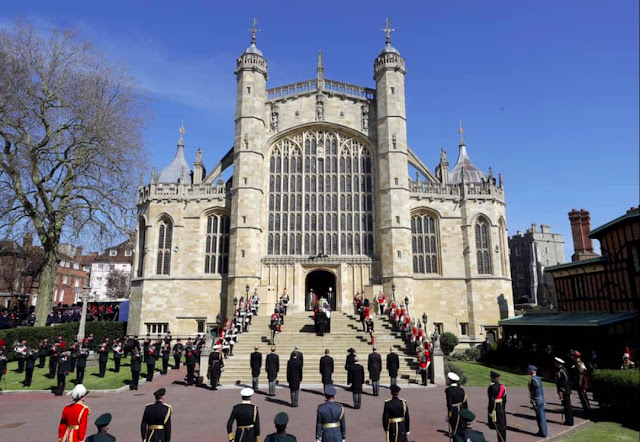 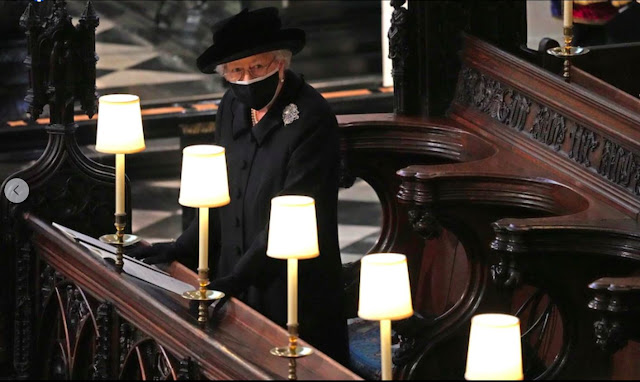 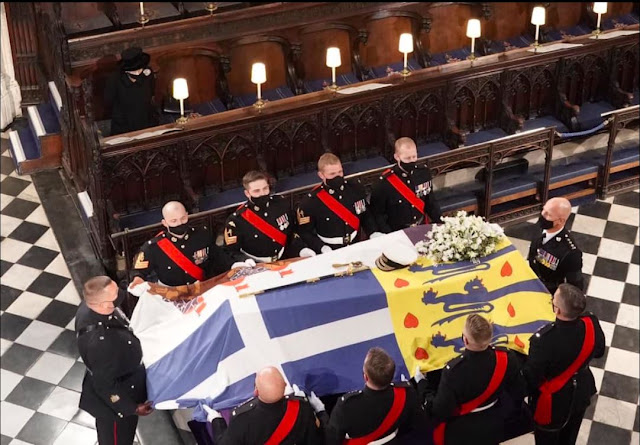 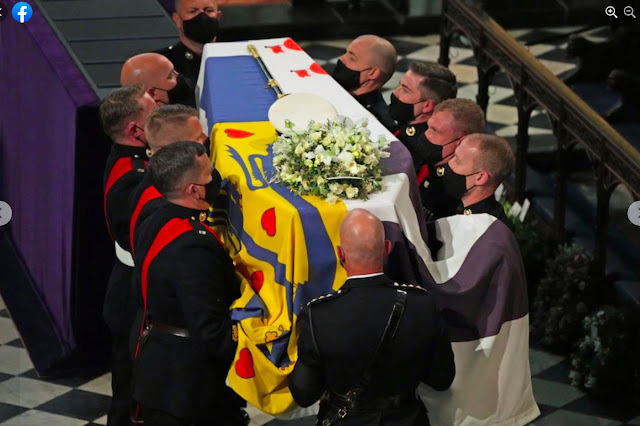 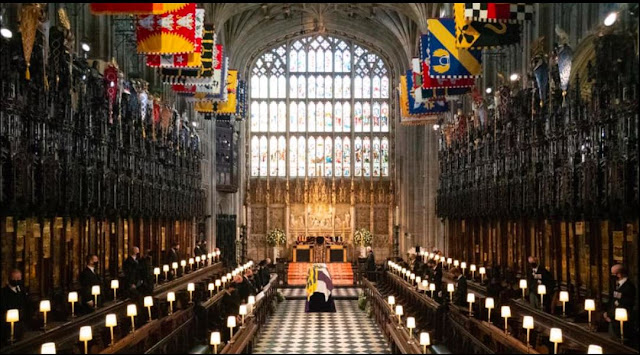 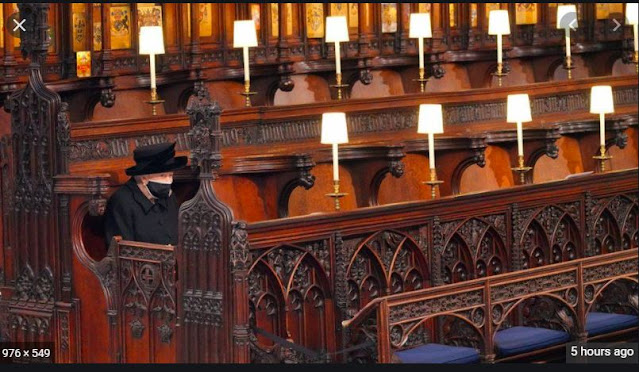 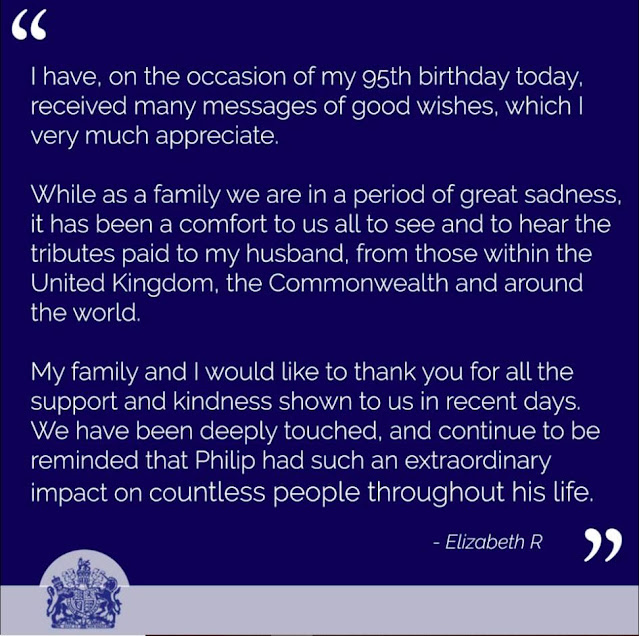