Baking in the Country

I've written posts before on my days with my friend Karin that I titled "Baking in the Country" as she lives on acreage which is only 10 minutes from my house.  We always go to her house as it's a treat for me to enjoy their house and beautiful view however I wanted to return the favour and last week we had a day at my place.  Karin hasn't made pasta before so I said I would show her how to make it and we could have it for lunch.  Karin brought some home grown basil with her which she had collected the seeds from some previous basil and had grown it from this seed.  It was the greenest and freshest basil I have ever seen, nothing like what you find in the supermarket.

Before she arrived I made the dough for the bread rolls written about here so that had time to prove and then baked the rolls in time for lunch.  We made fresh pesto to have with the pasta and had the most amazing home made lunch.  Pasta is so easy to make however if you haven't made it before it sounds so daunting however I was thrilled that I could show her how to make it.  This simple lunch made me so happy and sitting there eating our home made rolls and pasta with fresh pesto on it was such a delight.  If you haven't made pasta before I urge you to give it a go.  My only tip is to make it thinner than you think as when I first made it a long time ago it was too thick and just tastes rubbery so thinner the better in my opinion.  I would take a meal made like this over any shopping trip as it is such a feel good thing to do.  I still can't get over Karin's lovely green pasta...look how green it is. 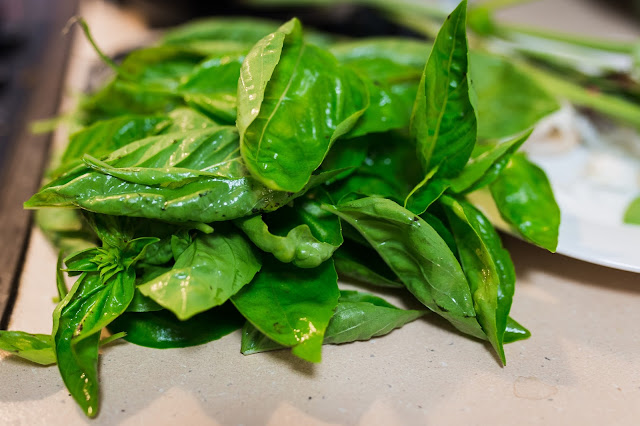 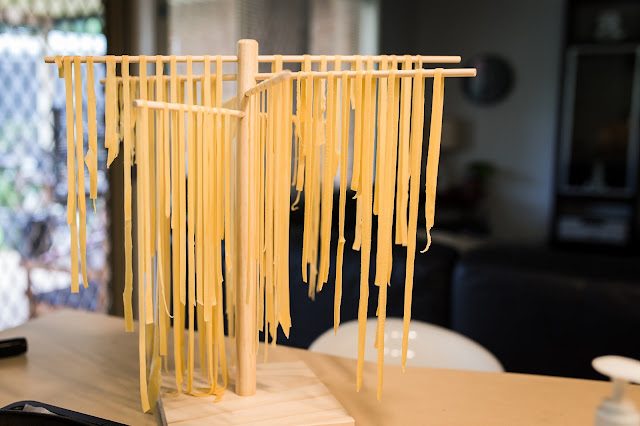 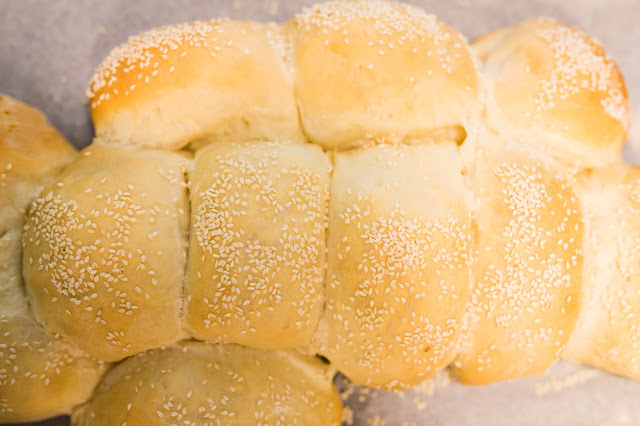 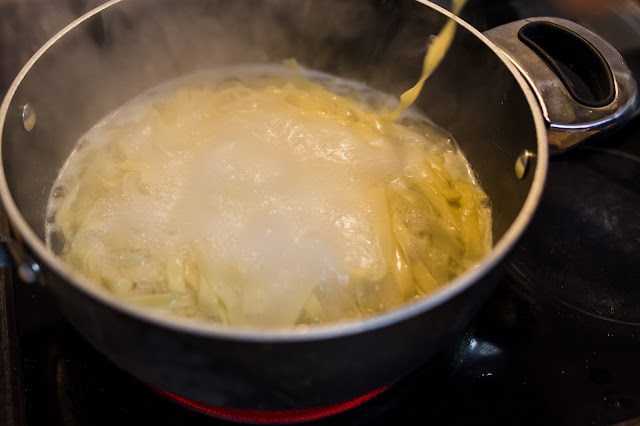 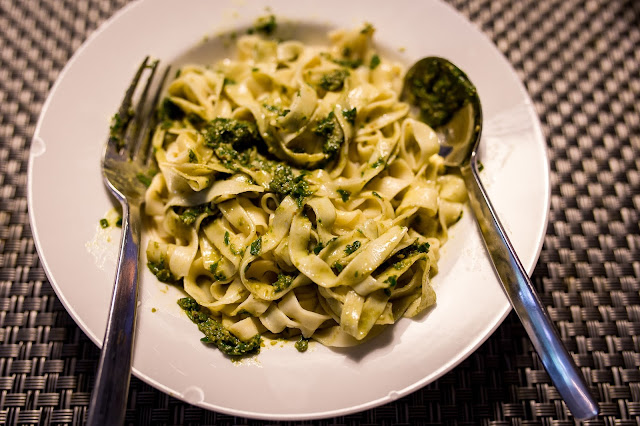 My book finally arrived on Thursday and I was so excited to start reading it.  Here's a sample of a couple of pages in the book which has some recipes including step by step instructions for making bread.  The book is broken down into 12 months from January to December with a different focus for each month including budgeting, meal planning, veggie garden planning etc.  You can read the book in order or pick a topic and focus on that.  The book is written with the Southern Hemisphere in mind however Rhonda has put a note at the back of the book for there Northern Hemisphere readers which chapters to read in order ie summer gardening in Australia is a different month then overseas.  So far I have read 2 chapters and it is written for a broad range of simple living families in mind.  Whether you are 20, 30, 40, 50, 60 or 70, whether you are single, married, with kids or retired there is lots of advice.

One thing I have always admired about Rhonda's blog is she does not "preach" ie she doesn't promote what she does as the way you have to do it. She tells people what they do in the hope that you may pick up tips or tricks but ultimately it's your family, your life and your routines and you can decide how your family wants to "live simply".  If you don't want to ever make bread, then don't.  If you want to go to the farmers markets and buy fresh veggies instead of growing your own if you don't have time then do what is right for your family.  The book is wonderful, it is well made and the pictures and instructions are wonderful.  It is a credit to Rhonda to pump out another amazing book which required hours of locking herself away in a room with her computer rather than just enjoying her life.  This is her last book and I'm very thankful I came across an article in the Burkes Backyard Magazine about about 8 years ago that she had written.  The fact that I was visiting with my in-laws in Melbourne who had a wonderful veggie patch also inspired me at the time.  I look forward to reading the rest of the book in the coming week.  I think the Harvest Turnovers below would be a big hit with my kids.

Note:  since I wrote this post I have made the flat breads and they are so easy and delicious.  Harvest Turnovers next on the list (21-05-2016). 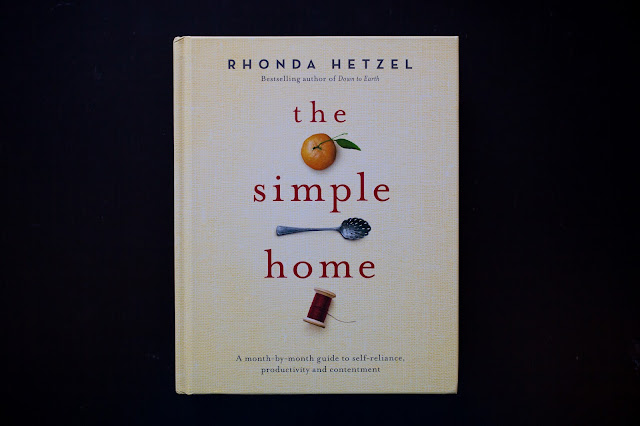 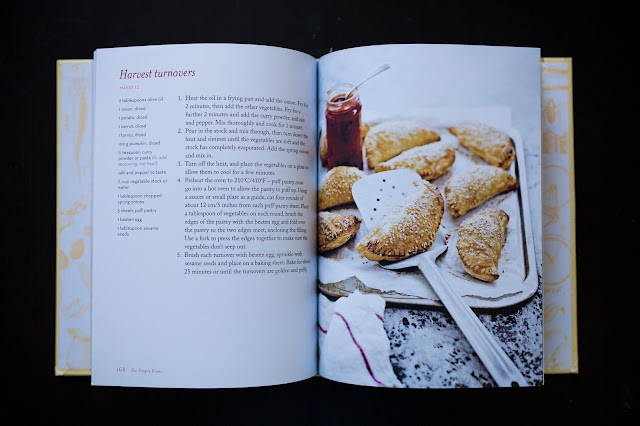 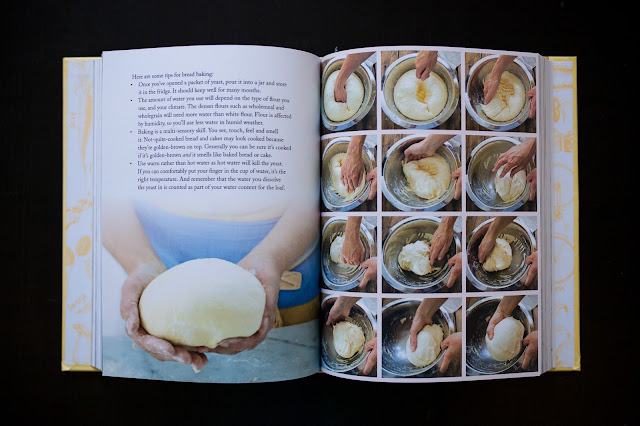 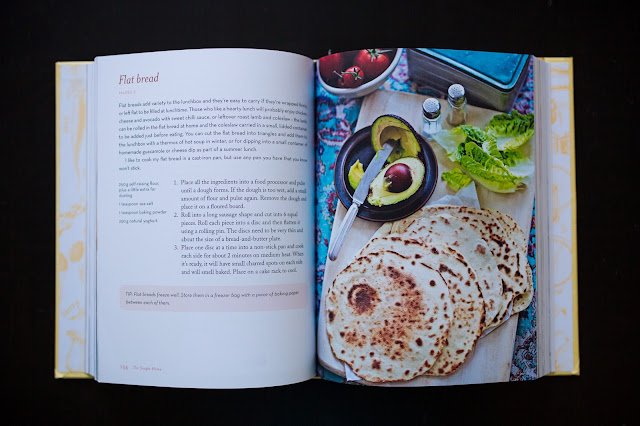 Last week we visited a friend and she made this delicious spicy soup for us and my kids loved it and that would be an understatement and they wanted me to make it once we got home so I made a batch yesterday and had some for dinner last night and now I'm eating some for lunch.  I don't know where the recipe came from so I can't link back to it and I'm not taking photos of it as brown/green soup doesn't look very appealing in photos so I'll post a couple of pics of my kids holiday activities instead.

Sienna wanted to have a camp out in the backyard on Sunday night and I didn't want to sleep outside myself with her so I told her she could camp in our family room so we set the tent up and she sat in their knitting and watching some TV.  She slept in it all night and loved it. 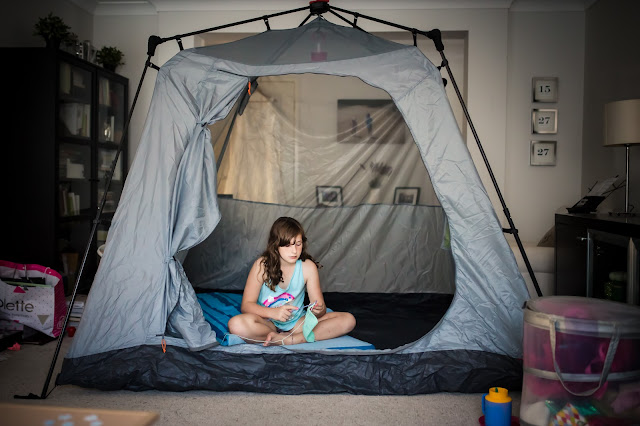 Let me warn you this cost me about $25 to make because I had to buy a cauliflower which was nearly $5, some red lentils and they only had a large packet $5 and I needed Korma Curry Paste which was also $5 something and then 8 cups of vegetable stock and a leek so It was between $20-$25 which I thought was crazy however I now have the Korma Curry Paste and lentils so I won't need to buy them for the next 6-8 times this soup gets made.  It is so tasty and thick and will go nicely with our home made bread rolls but for now I'm having soy and linseed toast with it.  I'm not a big fan of cauliflower unless my Mother in Law makes it with the yummy white sauce but this way my kids get to eat it as well.

INGREDIENTS
1 tablespoon of vegetable oil
1 leek, trimmed and sliced (you could use an onion if you didn't have any leeks)
2 cloves of garlic crushed
8 cups of vegetable stock
1 head of cauliflower, cut into florets
1/2 cup of red lentils
2 tablespoons Korma Curry Paste
lemon juice to taste (I didn't bother with this)

METHOD
In a large saucepan heat oil and add in vegetable oil leek and garlic and saute until softened.
Add lentils and stir for a couple of minutes.
Add Korma Curry Paste and stir for a couple of minutes.
Add cauliflower and mix around to coat all ingredients.
Pour in vegetable stock and simmer for 20-30 minutes.
Blend using Bamix or kitchen gadget (as it's hot always be very careful to keep the Bamix under the surface as you don't want hot soup splashing all over you.

As I was going off to the dentist to get a wisdom tooth out I spent 10 minutes cooking this in the pot on the stove and then just transferred it all to my slow cooker and let it could for 3-4 hours before I blended it at dinner time.

I'm not a lover of Indian food myself and have never bought any Indian Curry Pastes however this is amazing, spicy, filling and healthy too.  Would love to hear what you think.

James is an avid reader and he started and finished this book last week so I have to order the next one in the series from the library for him. 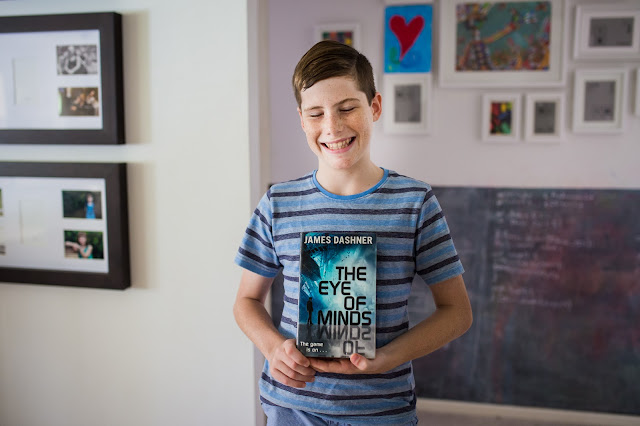 Around here we've had our first week of school holidays and they have been great.  We've been to the movies, skating, we went to the beach to visit a friend, cooked damper on a stick, made scones and the kids also made hot cross buns which they were thrilled with.  We watched Chitty Chitty Bang Bang and The Wizard of Oz, they played a little on their iPads, Sienna knitted and painted rocks with glitter and James read a couple of novels.  It was just a great week and as a parent when kids get on each others nerves and fight it's not very pleasant however there wasn't too much of that which made the week even more special...we all had a wonderful time. 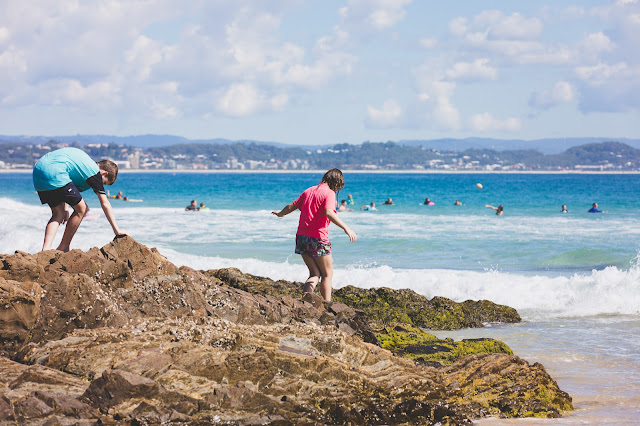 Watching the surfers catch the waves. 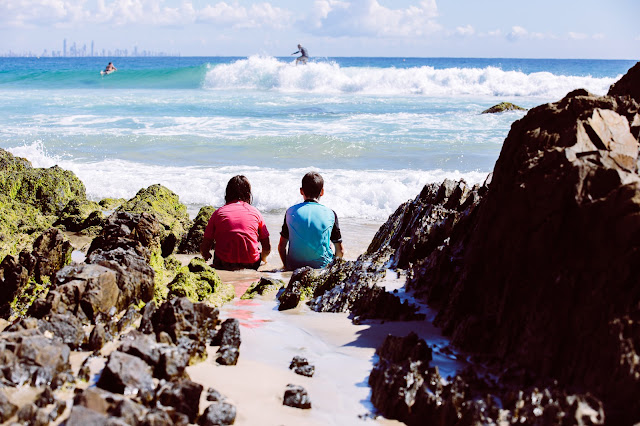 An unusual huge jelly fish on the sand. 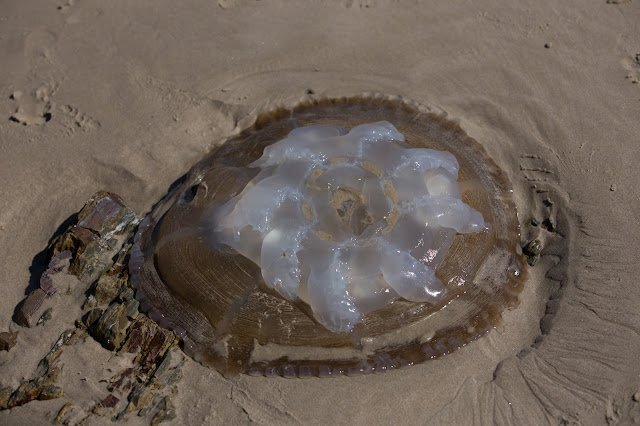 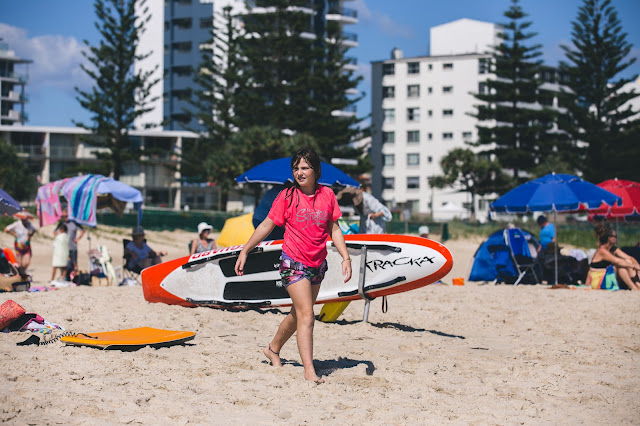 Painting the sugar syrup on the hot cross buns straight out of the oven. 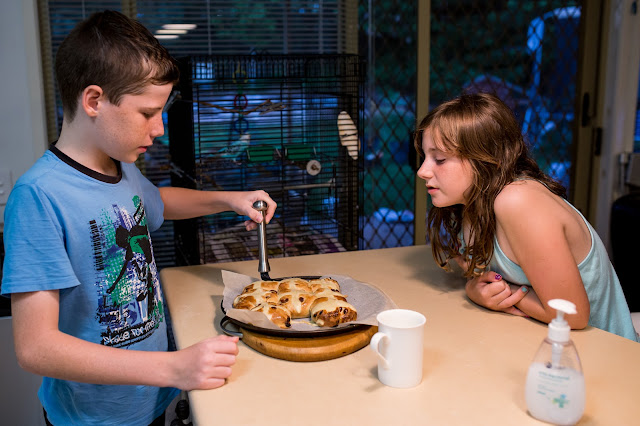 The kids made half with sultanas and half without as Sienna doesn't like them but loves the hot cross buns. 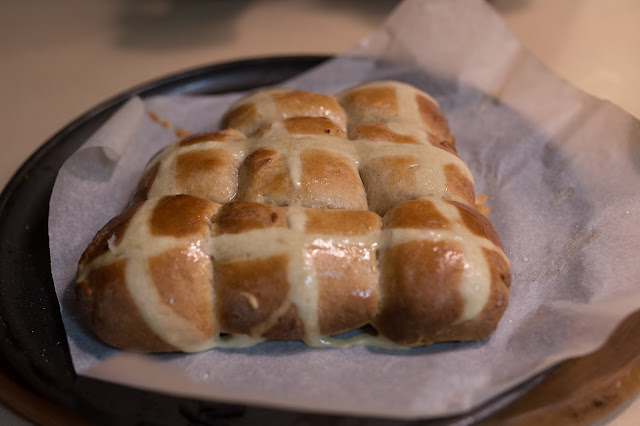 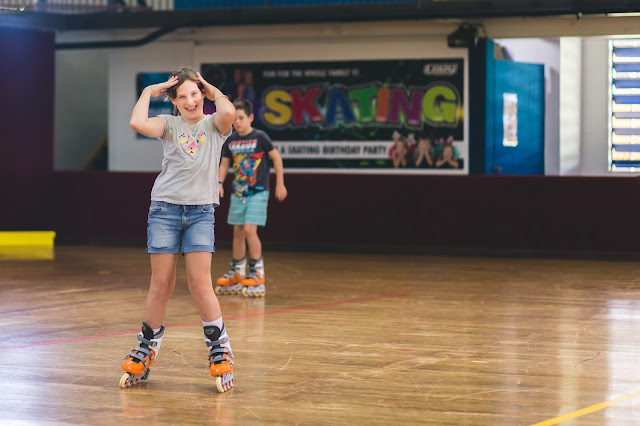 A morning at skating which is great exercise, good music and lots of fun. 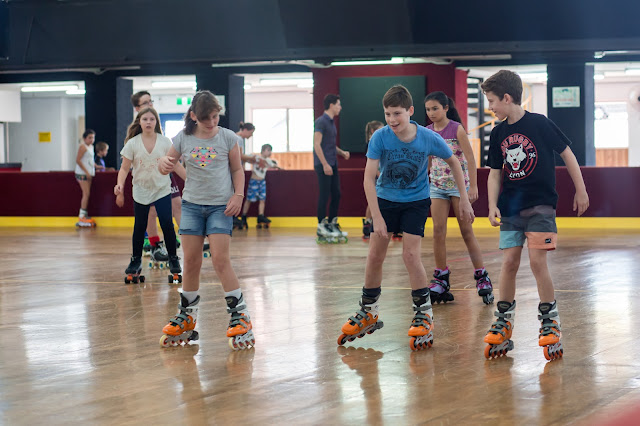 James decided to make some scones for morning tea. 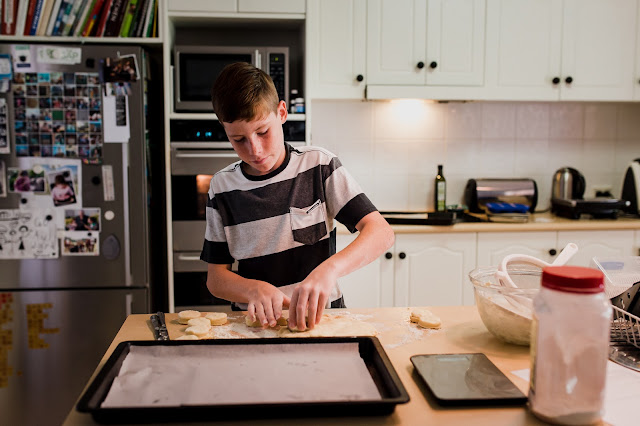 Sienna did a lot of knitting on the holidays, she is so good at it and starts new project by herself. 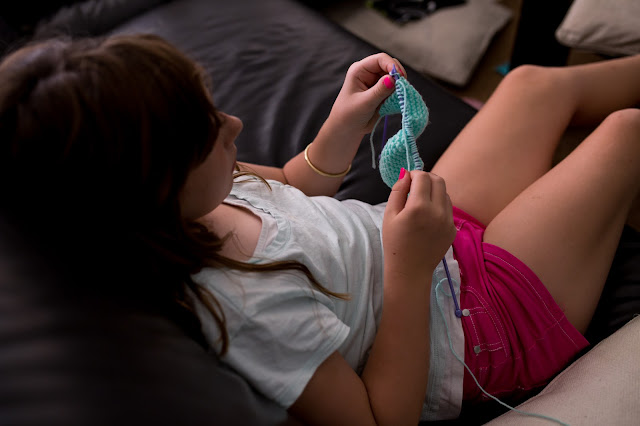 James picking up sticks in the local bushland. 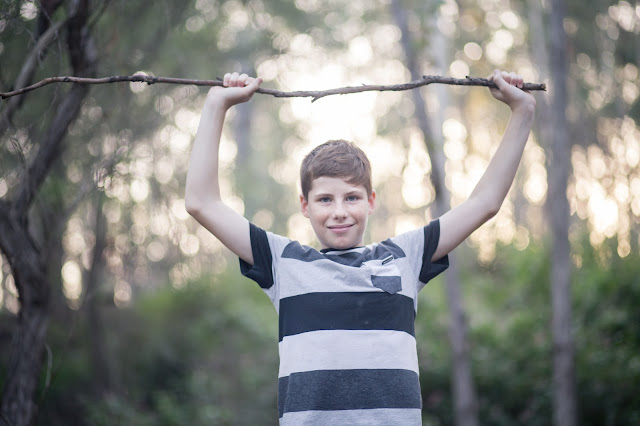 Sienna posing for a pic. 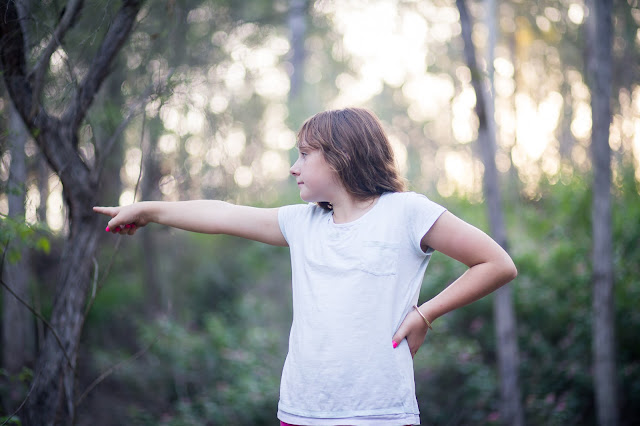 The kids making damper on a stick for afternoon tea.  This picnic ground with wood fires is about 10 minutes drive from our house. 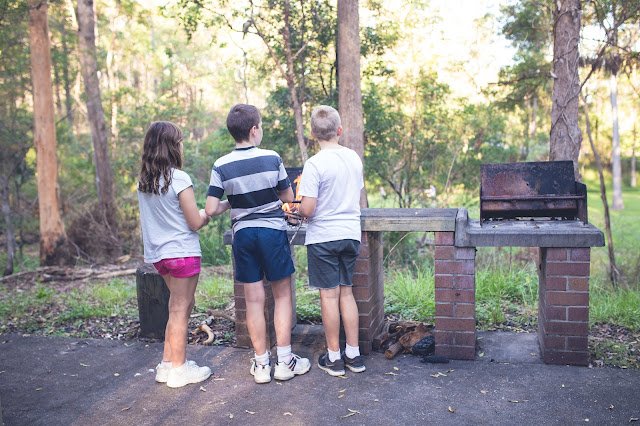 Once they are cooked we pour "Golden Syrup" into the middle of them, so yummy. Recipe is here. 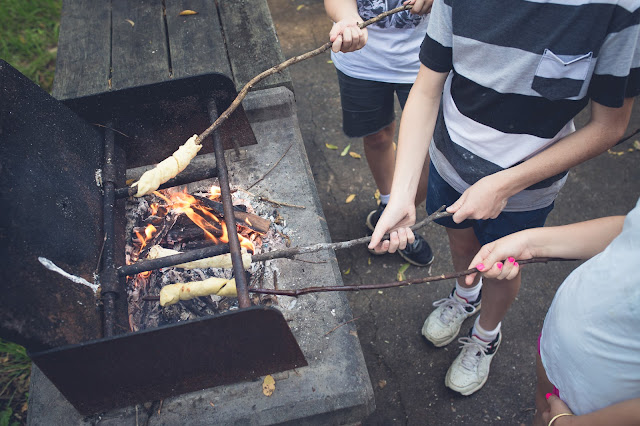