Around here we are mid March and it feels like the start of 2022 with Covid Omicron, then delayed school start, then the rain bomb and floods so it feels like every month is a new start to the year.  How is your year going?
Last week I purchased a beautiful piece of artwork by Paula Starrs who is an Artist in Victoria.  The painting was inspired by a photo taken by a photographer which is probably how I came across the IG account.  The painting is titled "Gum Blossoms" and is framed in a 58x66cm floating Ash Wood frame.
I have been wanting to get a piece of Australian artwork for the past year and when I came across this I jumped at the chance to own it.  I think I sent Paula a message 10 minutes after seeing the artwork on the Thursday evening, she shipped it on Friday and it turned up on my door step on Monday afternoon and was straight up on the wall.  I just love it and as an original piece of artwork no one else has it and thrilled to be supporting an Australian artist.  Paula has just sold another artwork this week and is shipping it to another Brisbane customer so isn't the internet wonderful when you can reach customers at the end of your device.
Here's some photos of how well the package was wrapped and the unboxing and putting it on the wall.  I can't tell you how happy it makes me seeing this artwork on the wall every day when I walk into my living room.  Have you purchased any artwork. 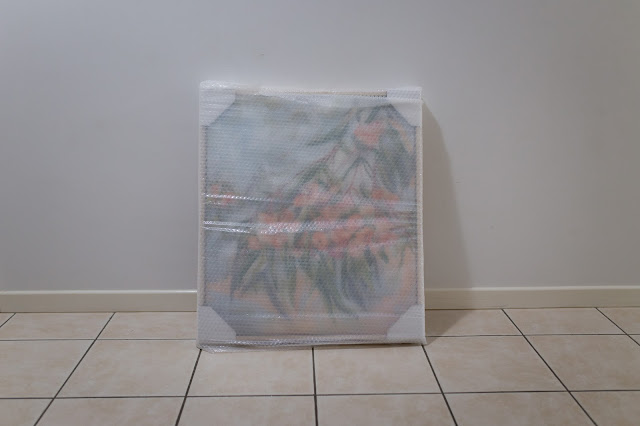 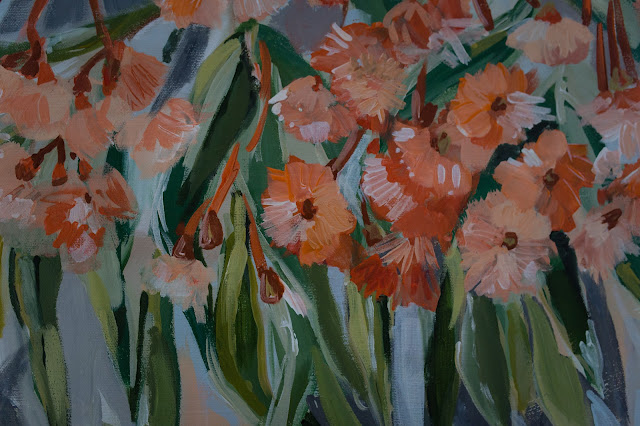 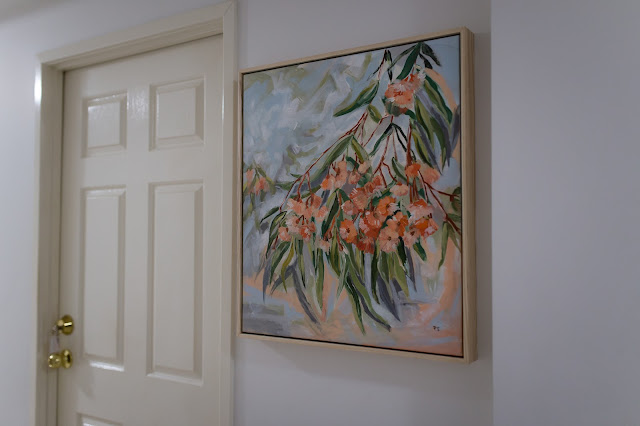 Then I moved it into it's permanent place in the living room. 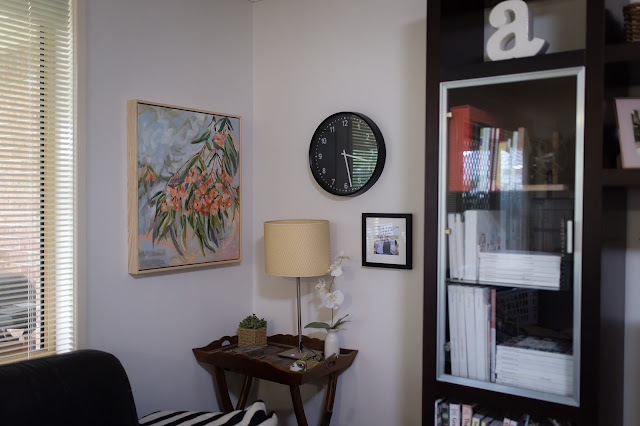 Oh wow what a big few days.  The East Coast of Australia has been battered by a rain bomb and Brisbane has received 2/3rds of the years rain in 5 days.  We last had a major flood in 2011 which was huge.

According to Professor Stuart Khan, an expert on water management at the University of New South Wales, says Wivenhoe Dam gained amount 1,450 billion litres of water, which all came in under 3 days".  That is about three Sydney Harbours' worth of water.  Compared with the floods of 2011, Professor Khan says this is about 50% more water into the dam in about half of the time.

We are safe and our house is okay however we live at the bottom of a hill so the water comes down and usually goes into the big drains but they were over flowing so our backyard fills up quickly and the water was about 2 inches from coming in the house.  The water goes up and down in the backyard as the rain goes from heavy to light so it gives the yard a little bit of reprieve.  I wasn't overly worried until Saturday night when the neighbours and I felt we needed some sandbags however the rain stopped over night so we were good.  Our street was a river of water and rocks brought down with mud from the mountain.  The mountain is still closed due to a tree falling on power lines and some landslides.

We wouldn't really be in a position to flood like many other areas that are low lying but the amount of rain was insane.  We were cut off on the main road up the hill and down the hill due to flooding.  Our suburb was inaccessible as well.  The roads have taken an absolute beating with 2 metre pot holes appearing in the roads due to the amount of water. Two of my friends are still without power in different suburbs even though there is no water around where they live.  There are hundreds of cars that are write offs and with the short supply of new cars currently people are waiting for 6-8 months for new cars because of Covid and the Pandemic due to the supply chain just replacing an insured vehicle will be nearly impossible.

We were supposed to be having a Birthday afternoon tea for my daughter on Sunday which we ended up cancelling and my sister was stuck up the Coast as the Bruce Highway was closed and couldn't get back.  She went up there on Saturday morning and could only get back today.

I'm confident we are not in a flood area and our house wouldn't flood however for half an hour there I thought if the rain goes all night it would come into our house so we were really lucky.  I feel so sorry for all the people that have lost everything and even with insurance money if they are covered, where do all these displayed people live while their repairs happen.  The task and cost to life, homes, businesses, family cars is enormous.  It was a first for us having our suburb cut off in all directions however we were staying home as instructed where it was the safest place for us.  The days and weeks to come will be a lot for many people.

What's happening in Lismore, NSW is frightening with many people sitting on their roofs waiting to be rescued. Huge pot hole as a result of the force of the water with bitumen lifted off the road. 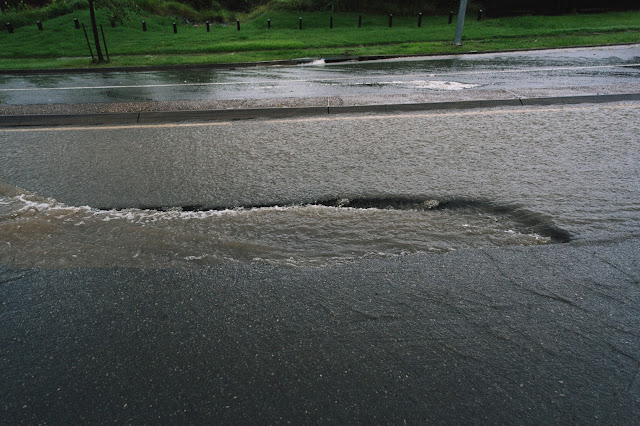 Lots of rocks brought down the hill by the water and all of this ended up on the road and a few of the men raked them up into one spot. 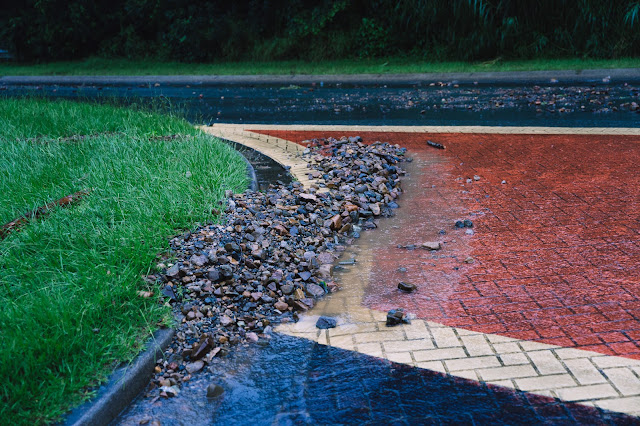 All of these rocks were in front of our house. 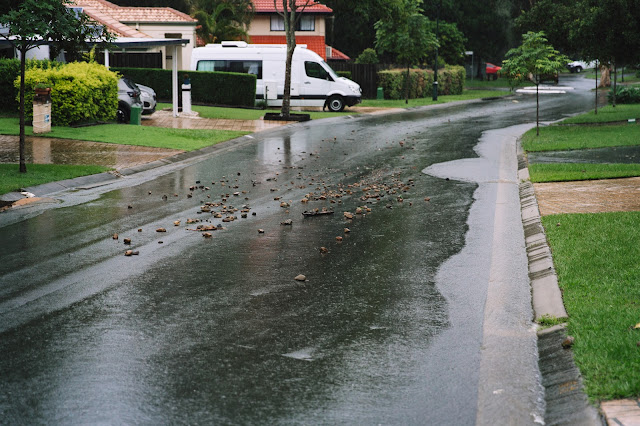 The mountain road is closed still. 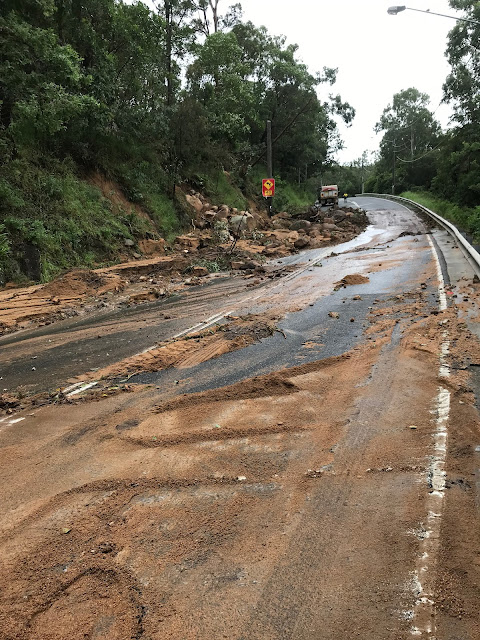 This is near my friends place and this spot always floods so it was not a surprize there. 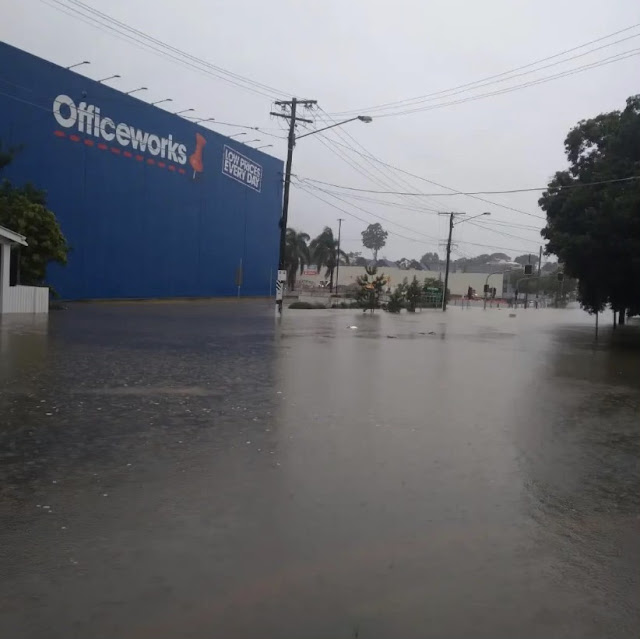 This was our road was a bit of a river at one stage water coming down from the mountain. 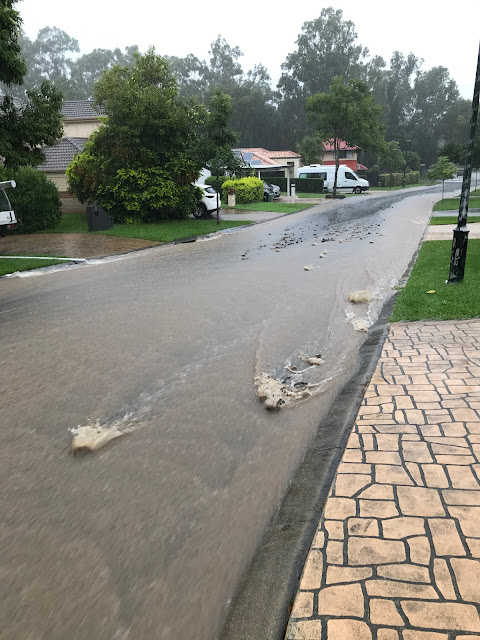 This is the backyard with the water going up and down which every time the rain eased
slightly it went away from the back door and then more rain it would come up again. 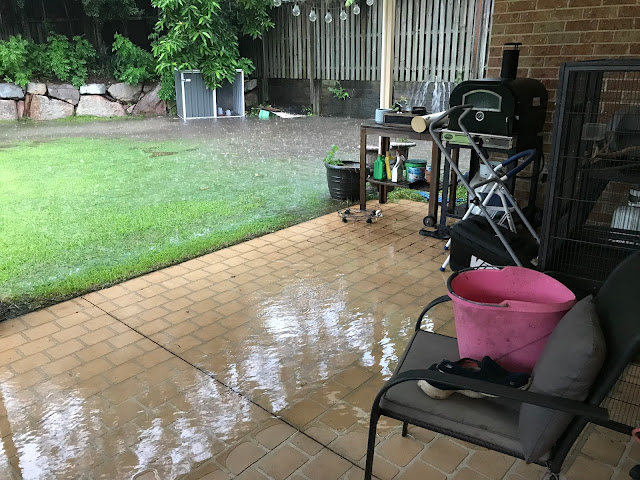 This was my back door undercover area. This was the other reason why our suburb was cut off we are on the other side of that water on the left. This is the main street of Samford. 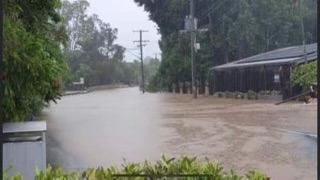 And when the water recedes this is what the roads are looking like. 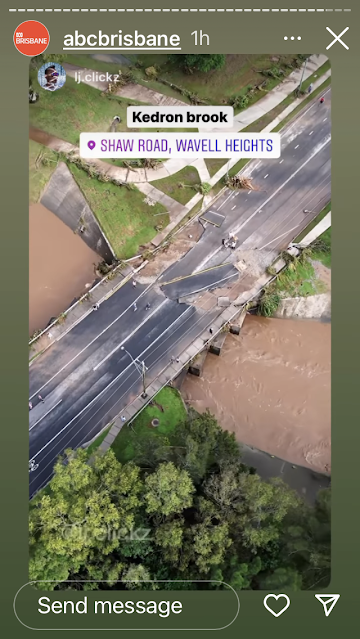