Just a reminder for those who want to bake a variety of biscuits with one recipe.  This is the 4 ingredient recipe and then add whatever topping you want, jam, M&M's, sprinkles, sultanas.  Because they are made with wholemeal self raising flour they must be good for you right!

Actually the thing I like about this recipe is it makes lots of biscuits with the one recipe so you can make a variety of things and I usually divide the mixture into two and freeze one half with the cooking instructions on the front of the plastic bag (ie 180c degrees for 10 mins) so there is no washing up for the next batch of biscuits.  You could however make all the biscuits in one batch and freeze them but I divide the dough into two, make the biscuits and put them in a container in the freezer and then put the remaining dough in a plastic bag but first I wrap the dough in cling wrap.  You can make jam drops, mix sultanas into some, choc chips on top anything.

Just bake for 10 minutes on 180c degrees.....I confess that the mixture by itself uncooked is very moreish and I find myself eating a little too much of it...yum.  Since I can't find my biscuit pictures I'll post a picture of my backyard flowering Jasmine instead and you can see the biscuit photos in my previous post here. 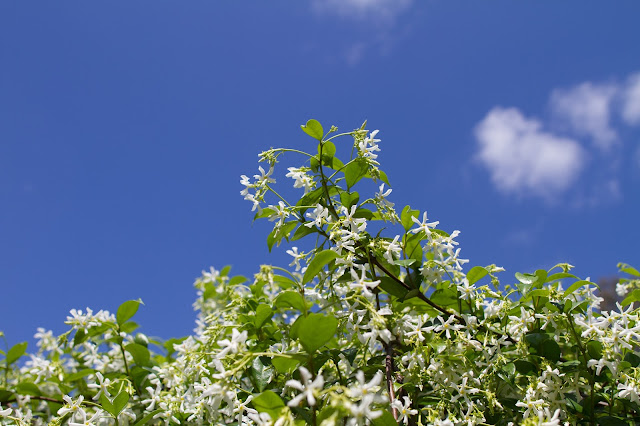 Around here we are have been camping in the school holidays.  We went to the Toowoomba Flowers with my family and have been generally hanging around the house.

Our camp set up at Thunderbird Park and you can see some cooking we did here. 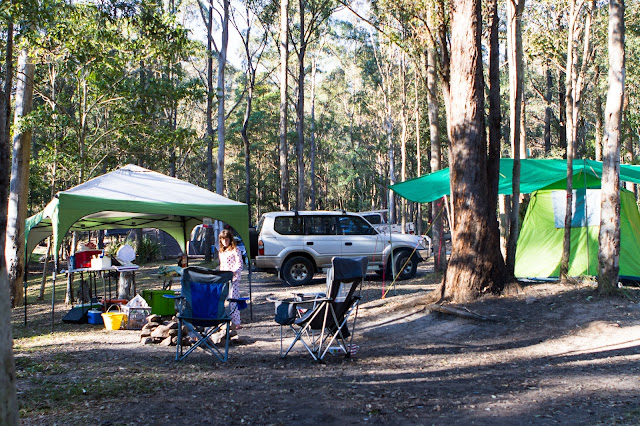 Sitting around the campfire. 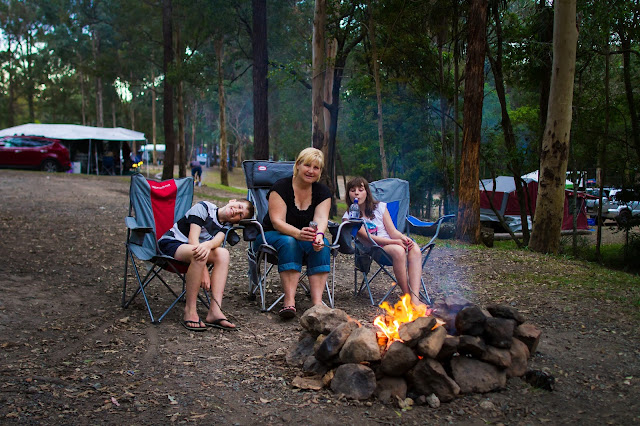 Toasting marshmallows for breakfast, yes this is considered breakfast food when camping. 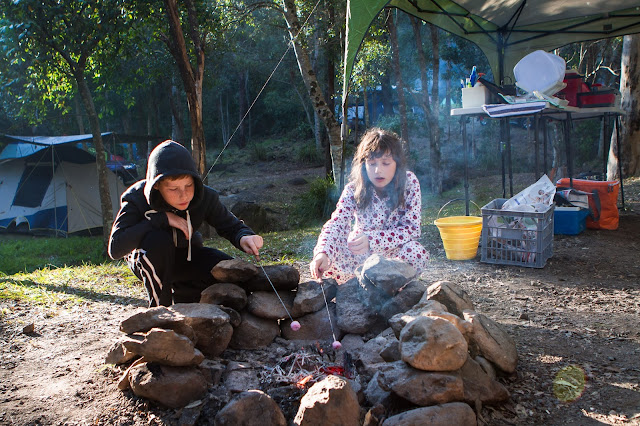 My twist on the Bacon & Egg McMuffin for breaky. 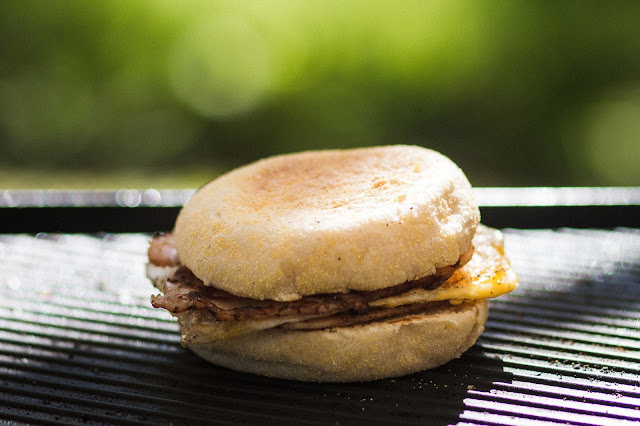 The kids did the fabulous 3 hour Tree Top Adventure and paid for it with their pocket money. 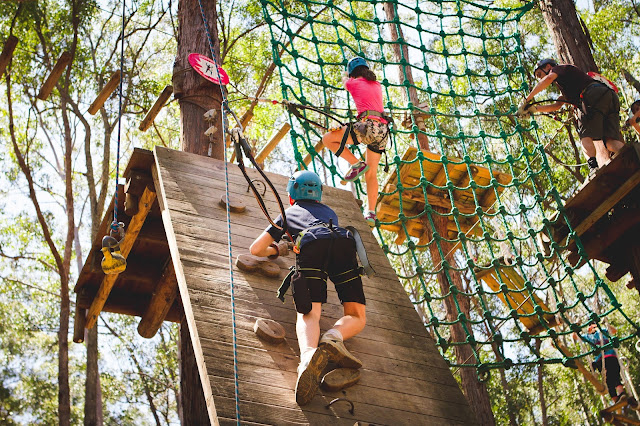 James set up with all the gear. 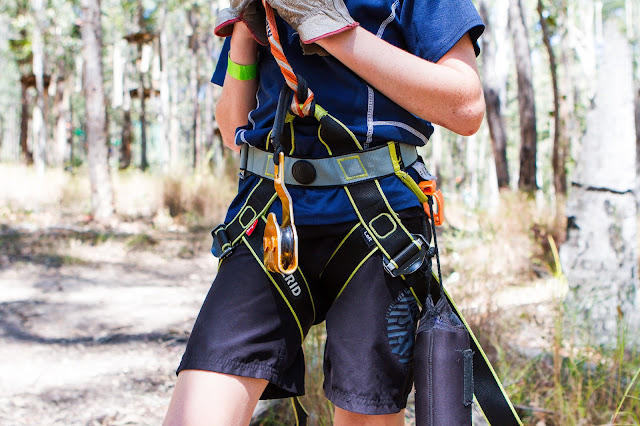 Sienna on the high ropes. 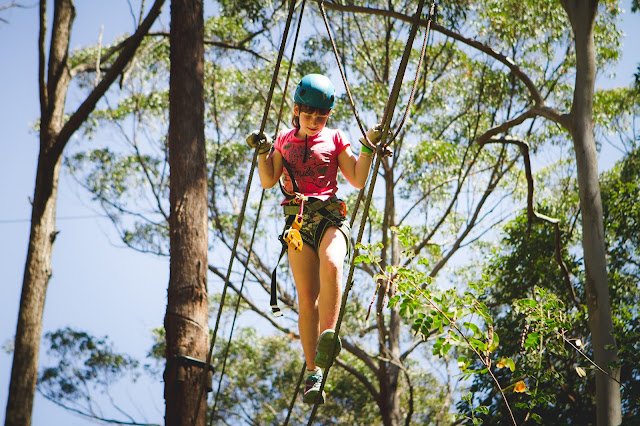 Making toasted sandwiches for lunch together while making up silly songs and singing them. 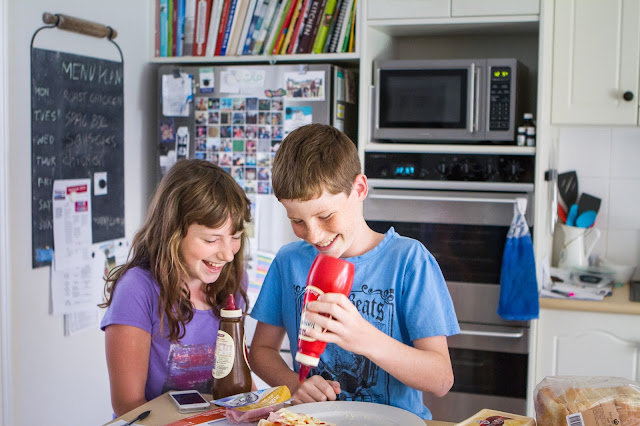 Sienna added some funny glasses to the mix. 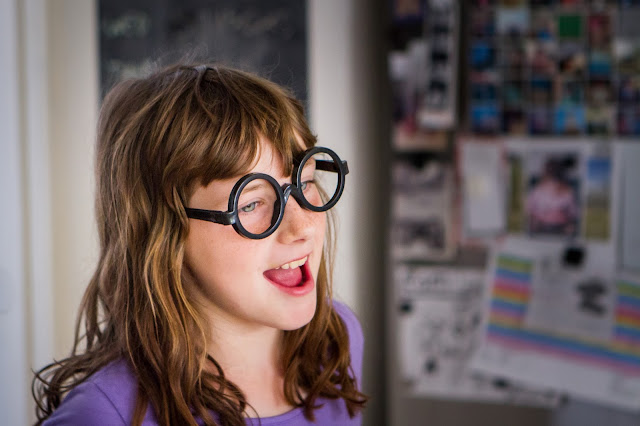 Evening sunset at the side of our house, love the reflection in the garage window. 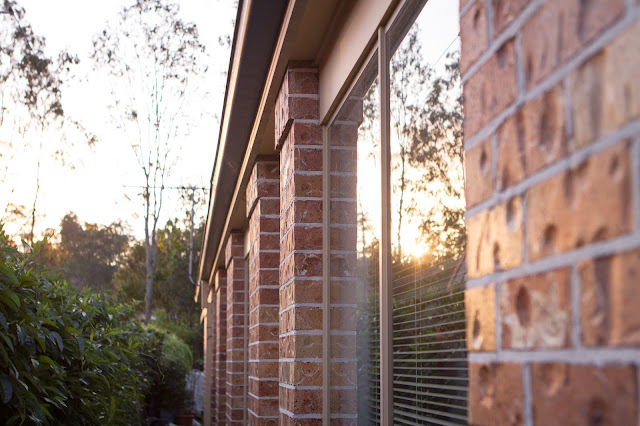 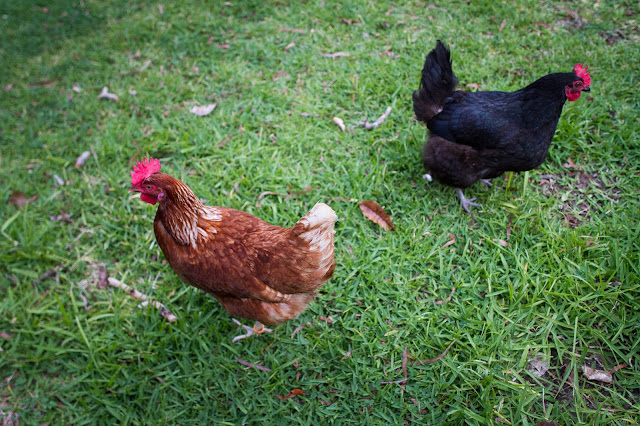 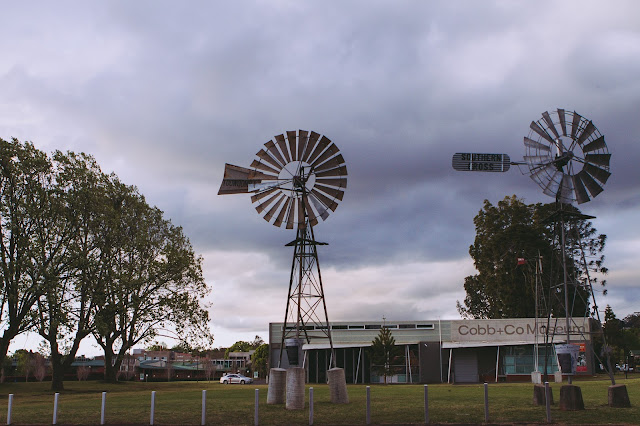 Queens Park in Toowoomba with the beautiful show of flowers. 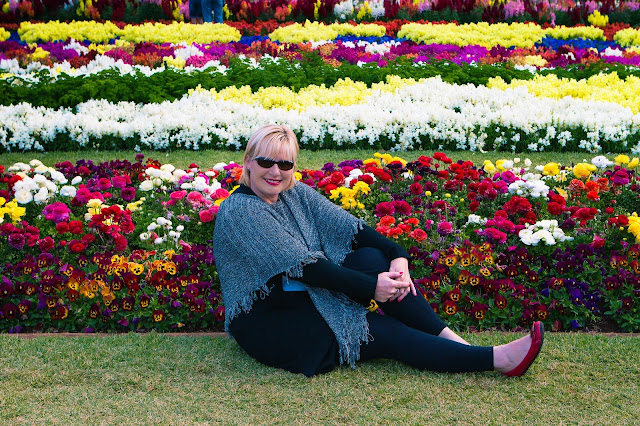 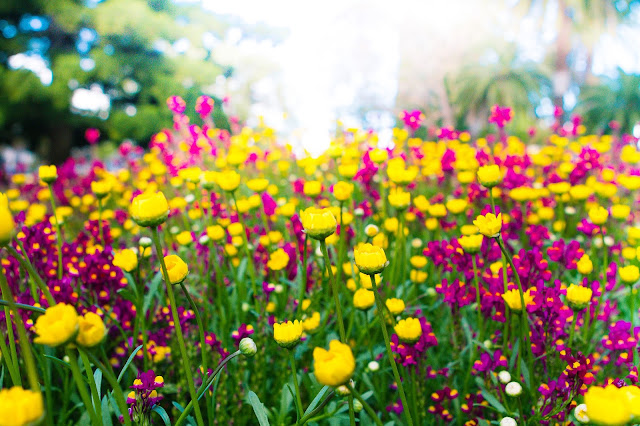 A view from above Queens Park, Toowoomba.  The history of the Carnival of Flowers is here. 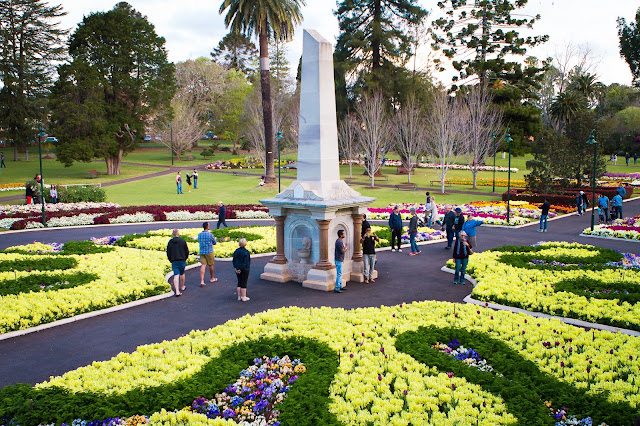 Last week I took the kids camping to Thunderbird Park at Mt Tamborine and due to our late booking everywhere was booked out due to the school holidays and the long weekend so we could only stay Thursday and Friday night and come home Saturday morning however it was great to get away for a couple of nights. 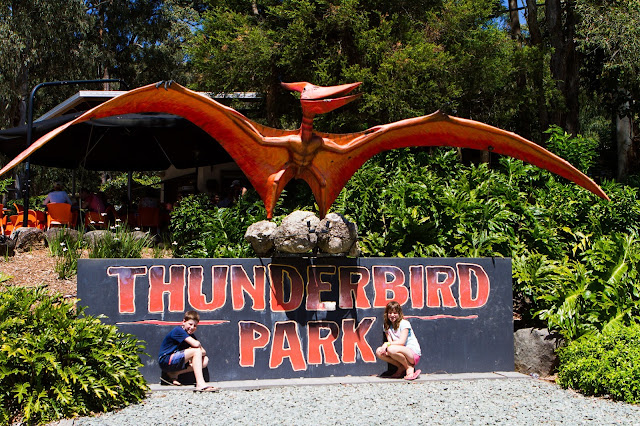 As we went on our own this time I had to invest in a smaller tent to fit in my car as the larger one has two big bags and I don't have the room for it unless we go with other people who have a trailer for the extra gear.  I ended up buying this little tent from Kmart which seriously takes 5 minutes to erect as you just pull it up in the middle and the side frame clicks into place and then it's just a matter of putting in your tent pegs.... I was really happy with it although I would consider it an "over nighter" since it's enough for 3 camp mattresses but I couldn't put much else in there.  The kids both had their backpacks at the end of their camp mattresses but since I was in the middle which effectively is the walk way I just left my bag of clothes in the car.  This is considered a 4 man tent however I will never know how they work these out really but it worked for us. 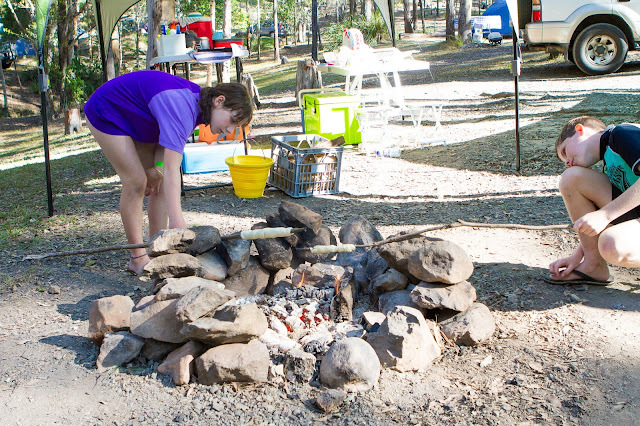 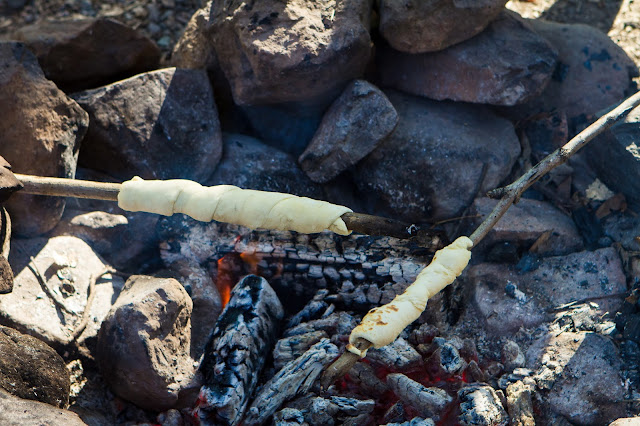 On previous camping trips I have made "scones" in the camp oven and a few years ago another mother had made the "damper on a stick" for the kids so I googled a recipe before we went and I made up zip lock bags with the mixture in it.  I have to say the recipe was delicious and nice and light too.

1 Tablespoon of Oil or butter (I used Olive Oil)
Water

At camp, mix the dry ingredients in a bowl with the 1 tablespoon of Olive Oil (or butter) and then add water slowly until you create dough the consistency of play-doh.  You want a firm dough that isn't sticky.  If you use baking power, set the dough aside to let it rise.  (we waited 10 mins).

Hold it over the hot coals (not flames) and turn until it browns slightly and then when it's done slide it off and fill it with butter and golden syrup.  As they are hot on the stick I used some paper towels to hold onto it to slide it off. 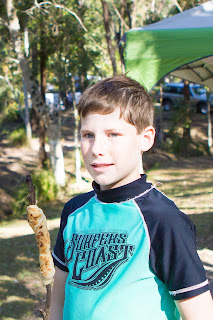 NOTES:  Try and get a thick round fairly straight stick...Sienna managed to get a really good one and James stick had a bit of a bend in it so getting it off once cooked was a bit harder.  Hunting for the perfect stick is considered another time consuming kids activity before you even begin.

Wipe your stick down and spray it with olive oil or flour or both.

I made up zip lock bags with the dry ingredients in it and at camp just added the tablespoon of oil and then mixed around then started added the water.

And in true form of the internet only displaying happy times....there was some fighting going on due to he/she has more dough than me which resulted in me telling them I was going for a walk to the toilets because I was over the fighting.......so basically this is real life but the recipe will be one I use over and over again.  I would say that the above quantity would really do 2 people so just make a double or triple batch depending upon how many you want to make.  I just did one batch per zip lock bag so had to add the 1 tablespoon of oil oil and water to each batch we made.  ENJOY....as they are delicious. 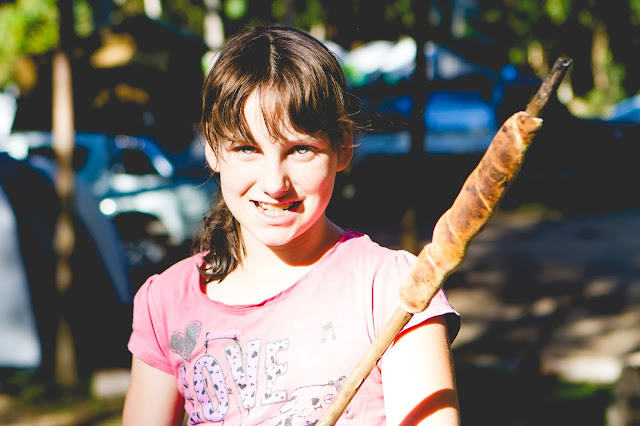