A Story of Seven Summers

I saw this book on a blog a couple of weeks ago and I took a picture of it on my iPhone so I would remember to get it out from the library.  Yesterday afternoon I checked the BCC Library Catalog on line and there was one copy at a Library 10 minutes from here.  It's not the Library that we regularly go to however it was still close.  I picked up the book and then when I got home I started reading it and I couldn't put it down.  By last night I had read three quarters of the book and that's saying something because I'm not a big book reader.

The story is about a British born girl who was raised in Tasmania by her family and then she spent 20 years abroad as a high flying journalist interviewing famous people and basically hobnobbing it and would think nothing of flying to New York for a weekend.  After 20 years she felt something was missing and flew home to Tasmania for a holiday and decided she wanted to buy a little run down house.  She found one, put in an offer and it was rejected.  The day before she was to fly back to London she saw a little white cottage that was closer than the other one and put in an offer and went back to London.  Her offer was accepted and she resigned from her high flying job and came back home with no plan in place but to get back to her roots and see what happens.

I have actually come across this story a couple of years ago in I think the Country Style Magazine and knew of her but it wasn't until I was over half way through the book that I realized it was her.  It was such a feel good book and a lovely autobiography about her seven summers in the "Nun's House".  She discovered that the little house she had bought had been where the Nun's lived and hence the house was renamed from "White Cottage" to "The Nun's House".  I just loved the book and loved her real life story so much that I've given the book to my mother to read.

I think when it comes down to it we keep coming back to the Simple Life is so fulfilling even though she had the big career wore couture clothing and shoes she couldn't be happier where she is mixing with the locals and living in "The Nun's House". 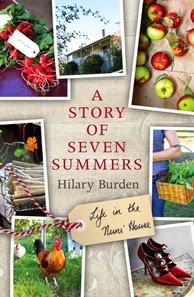