I have been wanting to make Home Made Yoghurt for the kids for a long time but have never gotten around to doing it.  I have a Thermomix and apparently it' pretty easy to make.  You can also buy a $20 yoghurt maker from the supermarket however I didn't want another gadget in my cupboard and besides that, I have a Thermomix.  So today was the day I was trying it for the first time and after reading instructions on Simone's blog it was time to get started.  The Thermomix Recipe Book also has instructions however, I just went with the wonderful post on Simone's blog. 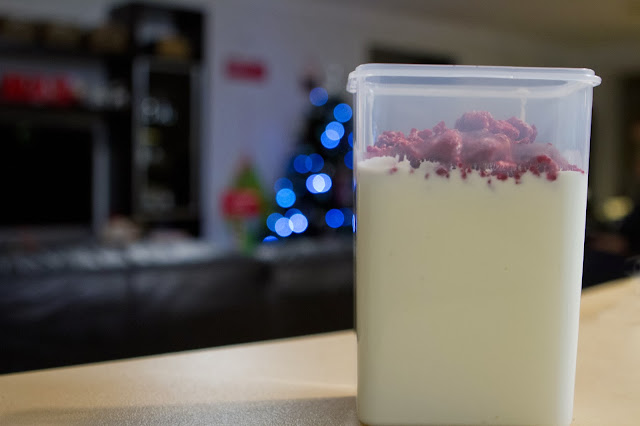 Basically it's one litre of milk and 50 gms of milk powder and into the Thermomix for 30 mins cooking time and then the jug with it's contents goes into the fridge to cool down to 37 degrees which is the setting temperature for yoghurt.  Simone's instructions said around 40 mins but if it's not at the right temperature just put it back in the fridge for another 15 minutes and check again.  Mine took that and a bit more however eventually it got down to 37 degrees and then I had to add the 3 tablespoons of natural set yoghurt (I used Farmers Union yoghurt as that's what they had at the supermarket) and then it cooks for another 10 minutes and then it's done.

While it was cooking for 10 minutes I warmed up my "Thermo Serving Bowl" with hot water and once the yoghurt was ready I tipped out the hot water from the server and poured the yoghurt liquid into the bowl, put the lid on and wrapped it up nice and cozy in a beach towel.  Our Elf on the Shelf was guarding it nicely all day for us.  In 6 hours and up to 24 hrs it stays wrapped up and the longer you leave it the thicker it gets.  Ours was left for 8.5 hrs and it looked great.  I don't eat yoghurt myself but the kids do and I know how beneficial it is for them.

You are supposed to reserve 3 tablespoons of the yoghurt as your starter for the next batch of yoghurt which I fully intended to do however I got carried away and added the berries and mixed it together before I realized I got side-tracked and forgot to do it.  Simone says that each time you save the starter and make a new batch the yoghurt is thicker and creamier the next time around so I'm planning to do that with the next batch.  The yoghurt is mixed with the raspberries and is in the fridge for the kids to have some at breakfast time.

As this was my first time and I was inexperienced it always takes you a little longer reading instructions, getting the temperature just right etc. but now I've made it once it's so easy to do and I'll know what to expect next time we'll be making regular yoghurt in this household for sure.  I'm so loving these new things I am making time to try out.  This is Happiness.  If you haven't make yoghurt before I'd give it a go even if you don't have a thermomix you could still make it on the stove and I'm sure "Mr Google" could help you in a nano second.  It beats paying $5.50 for yoghurt from the supermarket now I know how to make my own.  My sister recently purchased the $20 from the supermarket and has the sachets which is great for her and an easy option because it stays overnight in the container you mix it in but there are more ways to make it than just these two I would say.  Find what suits you best and get to and make your own yoghurt.  Who would have thought I would have been making yoghurt.  I don't eat yoghurt so I didn't even taste it however both kids gave it the thumbs up. 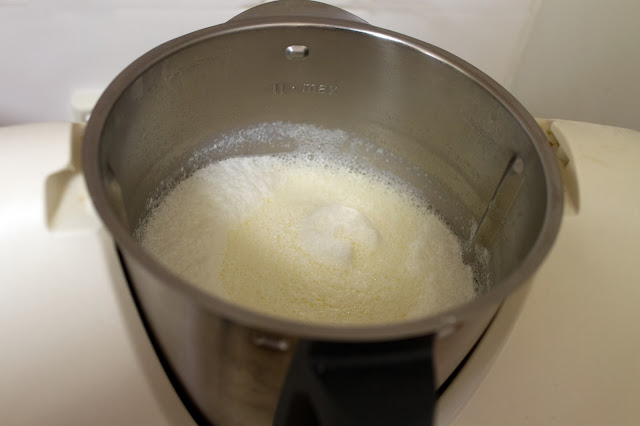 This is boiled water from the kettle which was pre-warming the bowl. 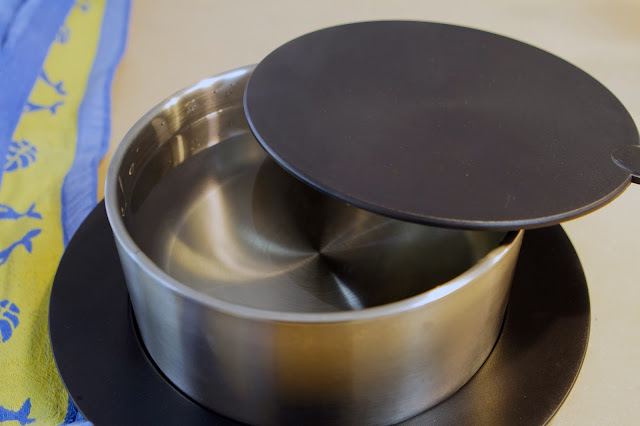 The yoghurt liquid now in the bowl. 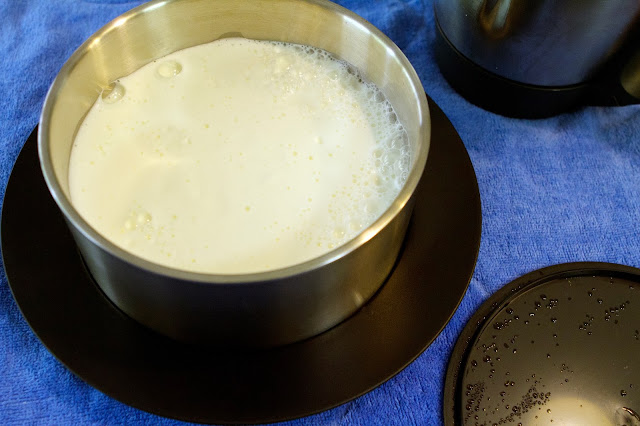 The bowl with it's lid on was then wrapped up in a towel and set to do it's thing for 8.5 hrs.  The Elf was keeping guard so no one touched or moved it while it set. 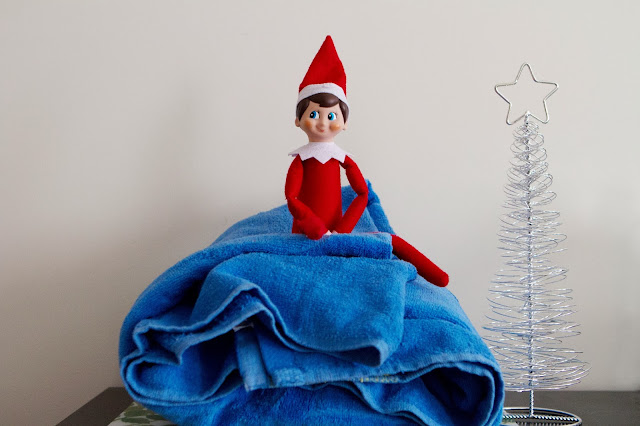 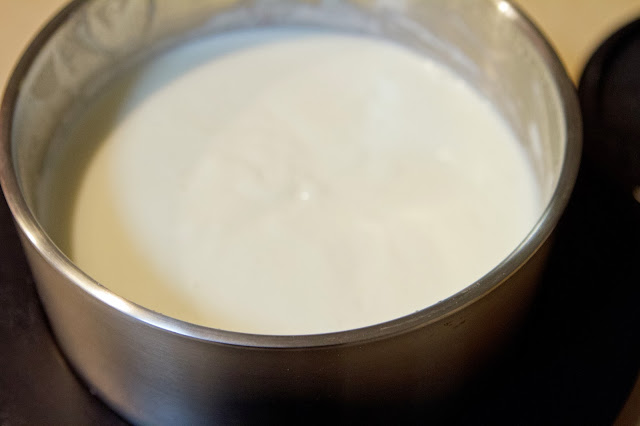 I put some raspberries on top of the yoghurt to be mixed in. 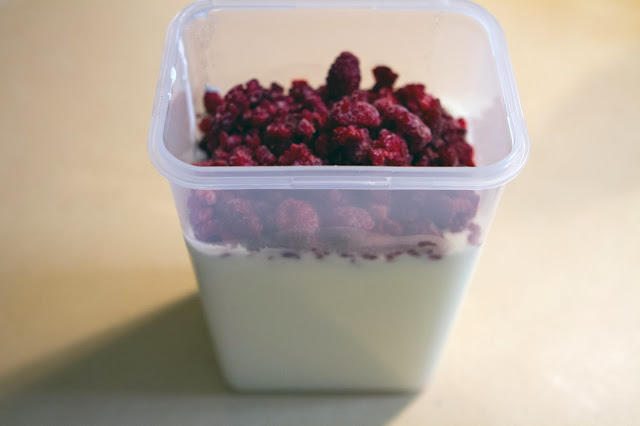 That's what I call "Christmas Yoghurt" with some twinkle in the background. 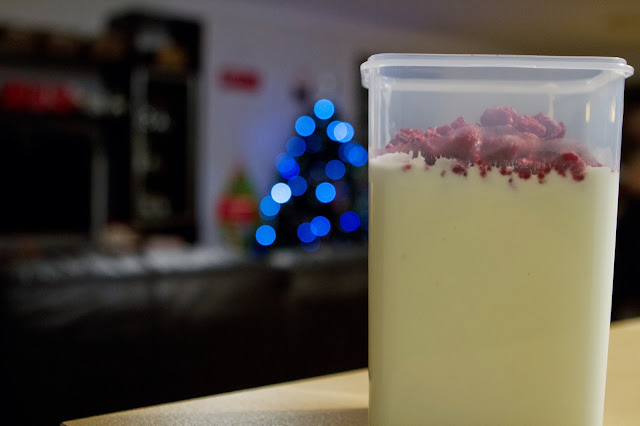