I decided this morning I would make Hot Cross Buns using Laura's recipe.  Laura has a blog called "The Kiwi Country Girl" and lives on a farm with her husband and two kids and various animals in New Zealand hence the name of her blog. 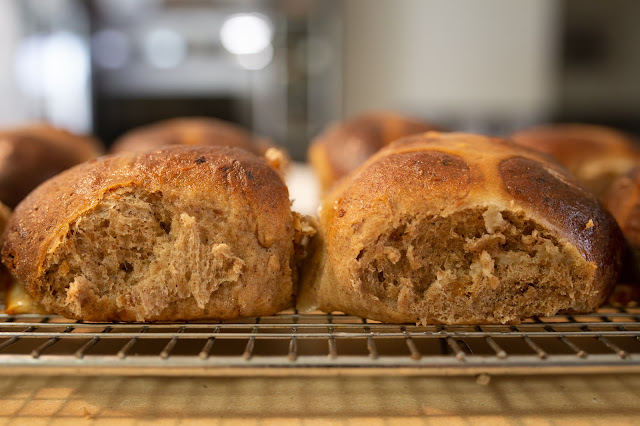 During this time of isolation lots of people have been getting into making bread that have never baked before as they have time on their hands to try a new skill.  Laura has been doing "cook alongs" on her Instagram Stories and has saved some of these to her "Highlights" so you can view them in your own time.  She has "Hot Cross Buns", "Bagels" and "White Bread" all in her highlights if you want to go check it out.

As we all know with bread making it takes a considerable amount of time from start to finish with doing a bit of this, then waiting, doing another bit of that and waiting.  Sourdough can take up to 24 hours, some over night no knead breads can take 12 hours, my turkish bread the other day start to finish took one and a half hours and the Rosemary & Oregano took three and a half hours, so you see it's an activity you can do when you are stuck at home.  First of all you have to work out what time you want to eat your bread and work backwards and allowing for resting time.  We make these fluffy bread rolls which take two and a half hours so if we want them for lunch I have to start around 9.00 am.   Getting back to the original post about making Hot Cross Buns, Laura says these take 2 hours and 35 minutes to make [I would allow 3 hours as you may need 60 or 90 minutes for your dough to rise depending on the temperature].  So in summary, that's Prep Time 30 minutes, Cook time 25 minutes and Rising time 1 hours and 40 minutes or a bit longer for the rise.

Laura's recipe has all of these things listed so you can print it out however here's a summary.  At the start you get three things ready in separate bowls so this takes about 15 minutes:-

After that, you bring everything together and knead with your dough hook on your mix master, kitchen aid or your Thermomix knead for 7-8 minutes or by hand for approximately 10 minutes.

Next is the rise part which again I had mine on a chair in the backyard for an hour. 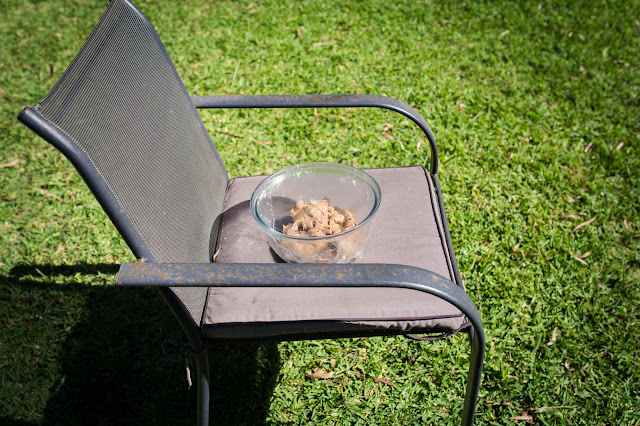 I didn't take a picture after it had risen however it only took one hour and the dough was right up to the gladwrap at the top of the bowl.

Next you punch your dough down and divide into 10 equal portions, then round them with your hands [see Laura's Hot Cross Bun Highlights for this] and pop them on a tray for another rise of 40 minutes. 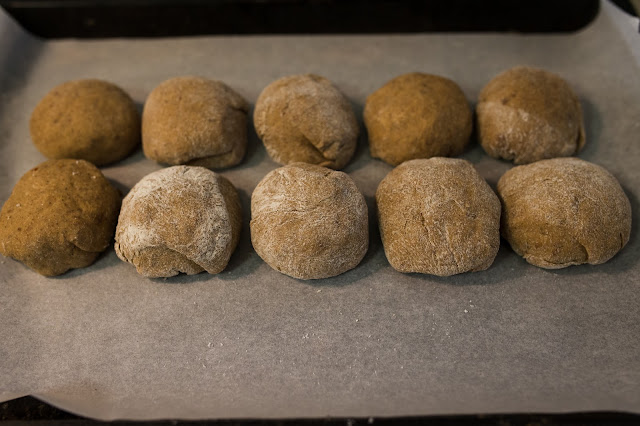 Back out into the backyard sun to rise for 40 minutes,   I had to be careful with this tray as the clingwrap wouldn't stick to the tray like it does to my glass bowl above and I didn't want any ants or insects to get to my dough so I was checking on it from time to time. 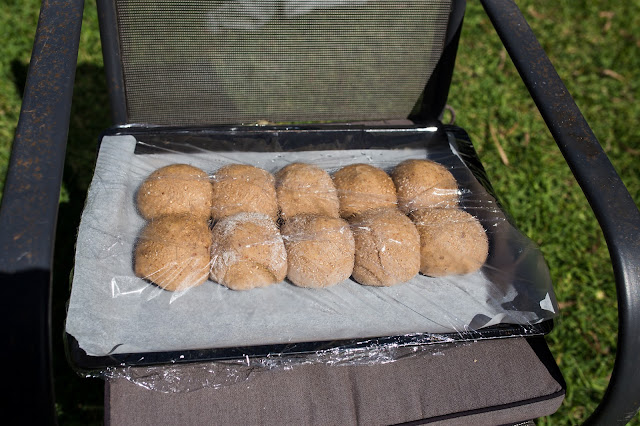 After 40 minutes they had risen again and I brought them back inside. 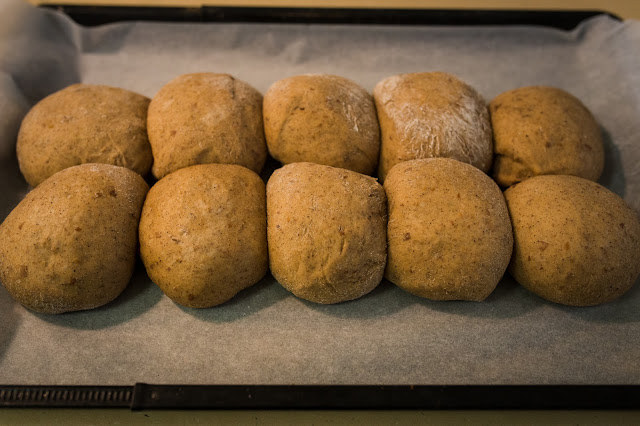 In the meantime the oven is turned on to 180 degrees and you make the mixture for the crosses as per the recipe and also get the sugar mix ready for after they are cooked.  All the ingredients and details what to do are carefully written in Laura's printable recipe mentioned above.

Make your crosses on the buns and then bake in the oven for 20-25 minutes.......I was very annoyed with myself because I didn't check them at 20 minutes like I would normally do so they got very brown and after my mornings work I was disappointed I had over cooked them by 5 minutes.

It was due to the fact that the oven was really hot and ready when I put them in...lesson learned so set your timer for 15 minutes and 20 minutes.  Anyway enough about that, I baked them and when they came out I put the sugar mix on with a pastry brush and they are AMAZING. 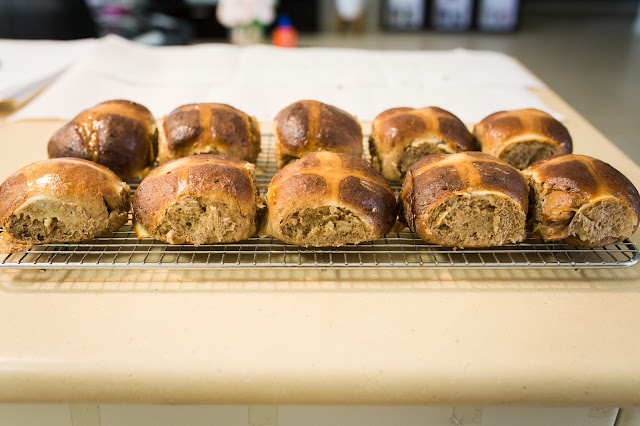 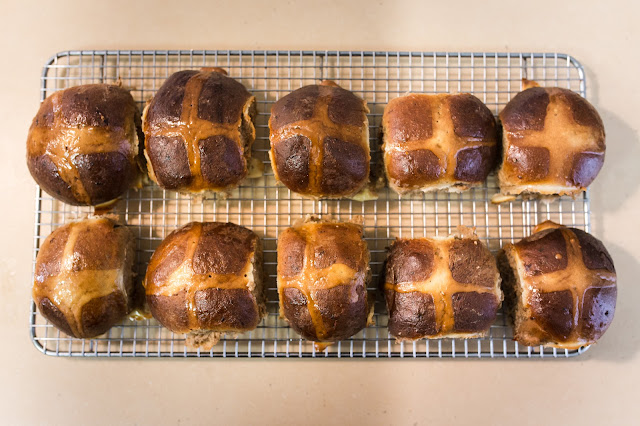 The dough is a perfect texture so soft and I'm really happy with the recipe.  This is a flashback to 2013 when James made Hot Cross Buns.

I can highly recommend you make Laura's recipe even if you think it's complicated, it's not...just give yourself 3 hours and do other things in between.  You will love how easy they are to make and totally beats the store bought ones with preservatives and additives.

NOTES:  Apart from over cooking them for 5 minutes I also made the mistake of "mixing" my ingredients in the Thermomix for 15 seconds which basically chopped the sultanas into specs so just go straight to kneading.  My daughter was happy because she doesn't like sultanas, and I was like, what are the brown specs in my dough about until I realized I had chopped the sultanas up.  So if you have a Thermomix go straight to the knead setting once all your mixture is in and the kneading will mix everything together leaving the sultanas whole.  We don't like mixed peel so it was just sultanas.

These recipes are the ultimate in slow cooking and as we all have a slow lifestyle now due to isolation now is a good time as any to try out new recipes since it's school holidays in Queensland and not home schooling online.  Let me know if you make these you will be so proud of yourself.
Posted by Kathy at 1:59 PM